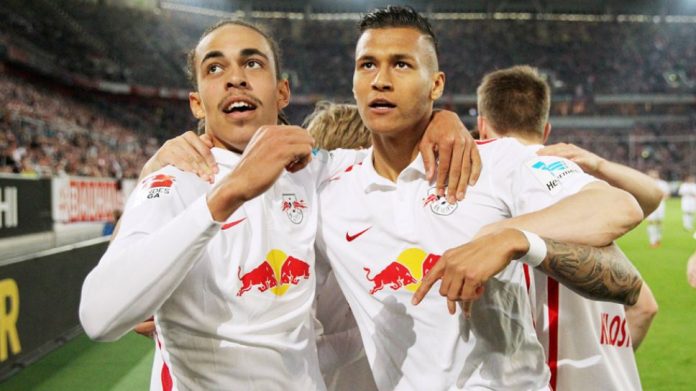 When Canadian hip hop artist Drake sang, “started from the bottom, now we’re here,” I am pretty sure he was not talking about RB Leipzig. But the funny thing is, it perfectly describes their meteoric rise.

Back in 2009, Red Bull bought semi-professional club SSV Markranstädt who were in the 5th tier of German football. They renamed them RB Leipzig to fit under the Red Bull sports umbrella.

Then, Red Bull forged a plan to get the club into the Bundesliga where the financial rewards would be huge. They brought in renowned German coach Ralf Rangnick to help. His role was to navigate the difficult lower leagues of German football as quickly as possible.

The strategy they adopted involved building an ultra-modern training ground, promoting young players from the youth academy and only signing players under the age of 24. However success does not come cheap and this strategy has cost Red Bull around £100m. Nevertheless, it has worked wonders with three successive promotions since 2013.

They are now amongst the elites of German football.

Even so their success has not been to everyone’s taste. Red Bull have been accused of using RB Leipzig as purely a marketing ploy to promote their company and make more money for themselves. Not to benefit German football or the city of Leipzig.

The vitriolic hatred towards them is apparent every time they play. One particularly shocking incident occurred this season when they played Dynamo Dresden in the German Cup. Dresden supporters threw a bloody bull’s head onto the pitch as an insult towards RB Leipzig’s owners Red Bull.

Nobody had seen a nothing like it during a German football match.

Despite the controversy and protests against them, they continue to plough forward unperturbed.

The start of their first season in the Bundesliga has been fantastic. They are in 2nd position with 5 wins out of 8 league games and an unbeaten record.

They announced themselves as a potential future powerhouse of German football 3 weeks ago when they beat German giants Borussia Dortmund 1-0 at home. That was a stunning result.

It showed how far the club have come in just 7 years.

The rise of RB Leipzig has been remarkable and it is likely to continue. So do not be surprised if you see them competing in the Champions League within a few years, or dare I say it…win the Bundesliga.