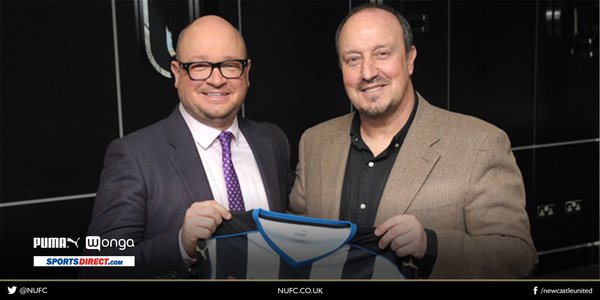 Newcastle United have appointed former Liverpool manager Rafael Benitez as their new manager, after officially announcing the sacking of Steve McClaren on Friday.

The Magpies are currently engaged in a tough relegation battle, and are second from bottom of the Premier League after Saturday’s 3-1 defeat to Bournemouth.

They have lost five of their last six matches and have just nine games left to save their season.

“I have the pleasure to confirm I have committed to a legendary English club, with the massive challenge of remaining part of the Premier League.

“It will be a challenge not just for me and my staff but for the players, the club and the fans.

“All of us must push together in the same direction and with the same target in mind. This is the reason why I’m going to ask for your total support to successfully complete this task.

“Personally, it means my return to the Premier League, closer to my home and my family. I can’t be happier.

“C’mon Toon Army! The club and I need your total involvement!”

Benitez has been given a three-year-contract with a reported break clause inserted in it, should things didn’t go according to plans for the rest of the season.

Newcastle face Premier League leader Leicester City in their next match on Monday.

Rafa, who won Champions League with Liverpool and Europa League with Chelsea, has been out of work since January after he was sacked by La Liga giants Real Madrid after only seven months in charge at the Bernabeu.

The former Valencia manager has the experience and capability to guide Newcastle to safety but one cannot help but think why he took such a challenging job at this stage of a season when he could have easily waited for a better opportunity next summer?