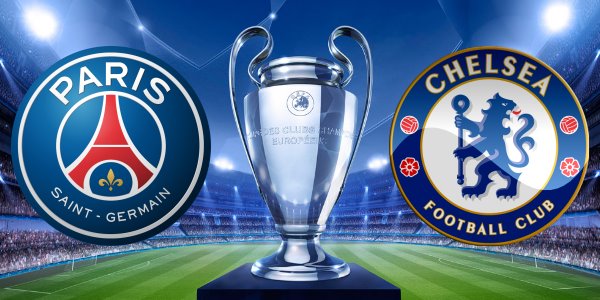 The following are the confirmed starting line-ups for the Champions League last 16 first league at the Parc des Princes this evening:

And we’re underway in the French capital.

We’re 15 minutes in and Thibaut Courtois has had a couple of straightforward but important saves to make, pushing away headers from Matuidi and Ibrahimovic.

GOAL! PSG 0-1 Chelsea. It’s three defenders who combine for Chelsea as the Blues get that precious away goal. John Terry’s cross is flicked on by Gary Cahill, and Branislav Ivanovic heads in another very important goal for his side.

GOAL! PSG 1-1 Chelsea. Edinson Cavani heads in from six yards to cancel out Chelsea’s opener. We are set for an in intriguing last 35 minutes. Chelsea substitution:

Juan Cuadrado comes on for his Champions League debut with Chelsea, replacing Willian. Just over 10 minutes left to play.

Edinson Cavani beats Nemanja Matic and goes through but shoots wide from a difficult angle. With only Courtois to beat, he should have kept that on target at least.

Chelsea substitutions: Cesc Fabregas and Diego Costa are replaced by Oscar and Loic Remy for the closing stages. Zlatan Ibrahimovic is denied an injury-time winner as Courtois tips the Swede’s header around the post at full-stretch.

FULL TIME: PSG 1-1 Chelsea Jose Mourinho will be the happier of the two managers as his side come away from Paris with a score-draw. The tie is tantalisingly poised going into the second leg at Stamford Bridge, but Chelsea will fancy themselves to get the job done.