PSG defender Marquinhos has grown frustrated by with the lack of first team opportunities at the French club. Constantly blocked by David Luiz and Thiago Silva, he’s not happy with his situation even if he doesn’t express it openly.

The 21-year-old is a highly talented defender. And for a player of his talent, he deserves to play regularly at a big European club. He is reportedly losing his patience with PSG, who have refused several big offers for him from top European clubs, including a €42m offer from Chelsea in January 2015.

According to Le 10 Sport, Chelsea have already let Marquinho’s agent know that they’ll try to secure his signature again in the summer. Will PSG sell this time? It’s possible. The club knows that Marquinho’s situation isn’t tenable much longer, and they’ll be free of FFP and can sign a suitable replacement for him, should he leave the club. 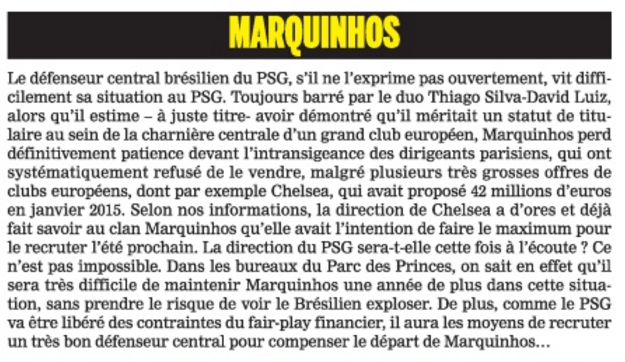 Marquinhos is also thought to be a reported target of Premier League giants Manchester United. The Red Devils have had made contact with PSG in recent past, while Marquinhos revealed that he was flattered with the interest shown by the Premier League club.

Laurent Blanc has said in the press conference recently that he cannot afford to start with three top defenders at the club. Indirectly, he meant the door is open for Marquinhos to leave, and urged him to let his decision know by the end of the year.

“We can not play with the three, would have to change the system and currently is not the case,” said Blanc in a press conference.

Marquinhos has a contract at the club till 2018, but this could be his last season at PSG. Is he heading towards Chelsea?