French magazine Le 10 sport in their latest edition has published a list of players that can leave Paris Saint Germain in the summer. One of the candidates in the list is Edinson Cavani, who you all know, is a reported target of Manchester United.

Daniel Taylor of The Guardian reported back in April that Manchester United have set their sights on Cavani, who would cost around £60m. 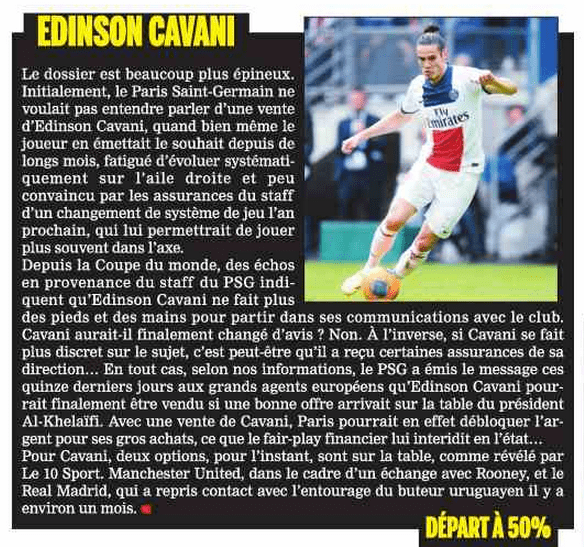 Le 10 Sport says Cavani has a high chance (50%) of leaving the club in the summer. The Uruguayan striker has been left disappointed with playing on the wings and although he has received assurance from the owners that he will be used as a number 9 next season, but Cavani is not cent per cent convinced the current system will change.

On the contrary, he has been given assurances that the club will let him leave if a good offer comes. PSG are keen to sell him to the highest bidder, but for now the most likely destinations are Manchester United and Real Madrid. PSG could lower their valuation as well, if United are ready to include Wayne Rooney as a part of the deal.

First of all I don’t think United need a striker. They already have handful of them at their disposal. Secondly, Rooney has signed a mega contract recently and no way a swap deal is possible.