French magazine Le 10 Sport has been giving us an update on Edinson Cavani every month. And every time it is the same old story. The striker is unhappy at PSG, because he has been forced to play on the wings, while he prefers a more central role. The Uruguayan is unsure whether his situation will change in near future and therefore he is looking for a move elsewhere.

Back in May, Le 10 claimed that PSG are interested in Eden Hazard and could sell Cavani as a direct/part exchange deal to land the Belgium international. However, such reports are quashed to dust, after Hazard pledged his future at the London club recently.

Cavani has been heavily linked with Manchester United as well, with The Guardian reported earlier that the Old Trafford club were showing heavy interest in the £60m-rated striker. 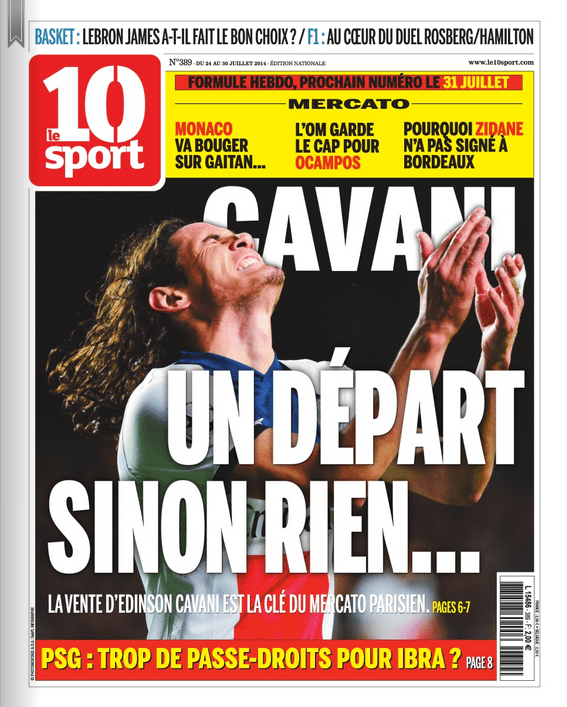 Le 10 Sport in the latest edition claim that PSG need to generate money from player sales this summer in order to balance their books, due to UEFA’s Financial Fair Play regulations, and Cavani seems to be the one they’re looking to make a big profit on.

The French champions are plotting a move for Angel di Maria, who has already agreed personal terms with PSG. The Parisiens are willing to offer the Argentine a 5-year contract, €9m salary each year and ready to meet €60m/65m transfer fee asked by Real Madrid; but in order to sign him the French club needs to sell Cavani, who’s been wanting to leave for a while, with Manchester United still remain one of his potential destinations.

Louis van Gaal isn’t willing to let go of Dutchman Robin van Persie, but a swap deal involving Wayne Rooney cannot be ruled out either. Let me clarify. This is what the report claim, not me, nor Soccerlens. Real Madrid could be a possibility too if they’re still looking for a striker.