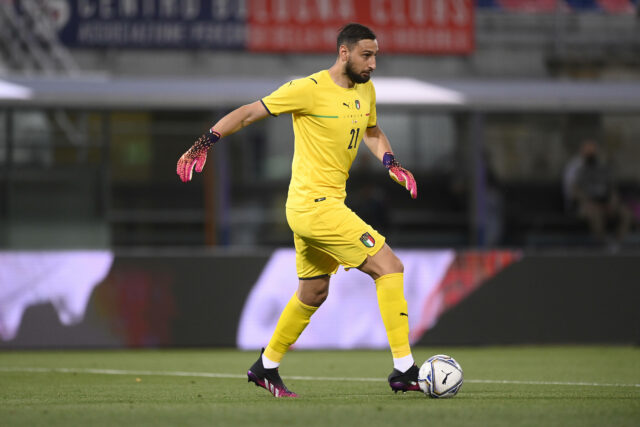 Paris Saint-Germain are close to signing Gianluigi Donnarumma on a free transfer this summer.

According to reports from Sky Sports, PSG are closing in on the signing of the Italy goalkeeper.

The 22-year-old will ask for the #99 shirt at PSG, while first-choice keeper Keylor Navas will stay at the French club.

PSG are set to complete the signing of Gianluigi Donnarumma in the next hours, Juventus are out of the race – he’s gonna ask Paris for n99 shirt. To be clear: Keylor Navas is staying. 🧤🇫🇷 #PSG

Wijnaldum contract until 2024 has been already signed, medicals now then done deal.

The goalkeeper is leaving AC Milan upon the expiry of his deal at the end of the month. He will join PSG as a free agent.

Milan had been locked in talks with Donnarumma’s agent Mino Raiola for several months, but the Serie A giants couldn’t reach an amicable agreement with the player.

Excerpt from Sky Sports: “PSG are understood to have offered Donnarumma a five-year deal with wages of around 12 million Euros (£10.3m) per year plus add-ons and will win the race to sign the goalkeeper should Barcelona not match or better their bid.

“Donnarumma is currently on international duty with Italy and could undergo a medical at the national team’s Coverciano training base before their opening Euro 2020 match against Turkey in Rome on Friday.”

The news will come as a blow for both Tottenham Hotspur and Arsenal.

Italian publication TuttoSport claimed this week that a trio of London clubs – Arsenal, Chelsea and Spurs – are keen to sign Donnarumma.

Arsenal and Spurs badly needed the services of the Italy goalkeeper, but it seems they have to look for options elsewhere.

Tottenham: Spurs skipper Hugo Lloris has entered the final 12 months of his contract, and doubts remain over his long-term stay at the club.

He is 34, and Spurs need to sign a long-term replacement of the Frenchman.

Arsenal: Bernd Leno has been the first-choice keeper, but he struggled last season. There are suggestions that he could leave the club this summer.

With Arsenal operating on a tight budget, getting Donnarumma on a free transfer would have been ideal for them.

It seems the lure of money and European football have turned his head.

He will be earning a huge amount at PSG, and it’s really a shame for both Spurs and Arsenal that they couldn’t pull off a deal.