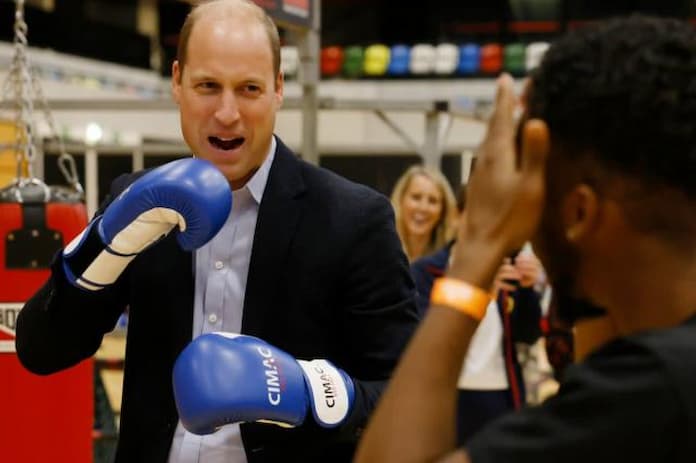 Prince William has shown off his boxing skills at a sports charity, backed by his own foundation, as he pulled on the gloves, hit the pads, did some sparring and hit the heavy bag a royal right hook.

Boxing really is for everyone and anyone. As William, the Prince of Wales, has show, anyone can enjoy a bit of boxing. Even if you are part of The Royal Family!

The Prince of Wales looked to have enjoyed a trip to Coach Core, a training organisation that is based at the Queen Elizabeth Olympic Park in London, England.

Prince William and his wife, the Princess of Wales, seemed to thoroughly enjoy their time at the sports charity, with Kate trying her hand at wheelchair bowls, with her husband pulling on the boxing gloves as well as kicking a football.

The visit marked the 10 year anniversary of of the charity, which has done some quite excellent work in London and developing sports coaches. In a speech during his visit, the Prince of Wales hailed the “incredible achievements” of the organisation, who train coaches who will then work in their communities.

Prince William went on to add that boxing provides “hope, connection and opportunity” for people. The prince showed off his boxing skills to two of the Coach Core teaching students, who in turn gave William some tips and hints.

Gabrielle Reid, who is 18-year-old and two months into her training course to becoming a coach, had this to say about Prince William’s boxing ability:

“He picked it up very fast, and he said he had boxed before. I didn’t have to teach him much. I’m not going to forget this experience, it was crazy.”

Joshua Jones, a 21-year-old who is also two months into his programme at Coach Core, had this to say about whether Prince William will get in the ring anytime soon.

“I just went over the fundamentals of boxing. I showed him the jab, backhand and I showed him how to throw a one-two, and his stance and guard.

“He enjoyed it, he said he’d done a bit a before but had a little knuckle injury so wouldn’t be taking it up any time soon.”

In his speech, William said: “Sport has an incredible way of providing hope, connection and opportunity.

“We are both so proud of all the remarkable progress that has been made. To all the Coach Core apprentices, we want to say well done and also thank you.

“We all face barriers and challenges in life, and these can sometimes take incredible bravery to overcome. Not only have you faced these down, you have positively impacted the lives of others along the way and inspired many more.”