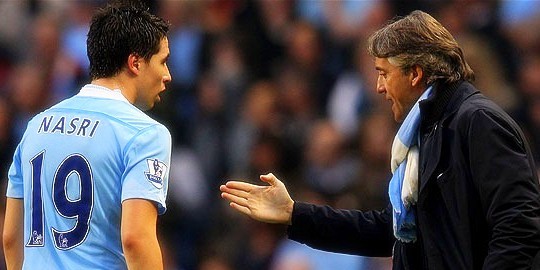 Manchester City manager Roberto Mancini had recently criticized his midfielder Samir Nasri for not performing to the expected level in the Premier League.

We all know that at this level, every player tries to deliver their best, but sometimes it can well happen that a player fails to meet the expected requirements asked from him. Nasri is one of them. He is a wonderful player and has great potential but is under-performing to a great extent.

The Frenchman struggled to make a bright impression in the first half of last season since joining from Arsenal for a big money transfer, but dazzled during the second half of the season.

He started the new campaign by scoring a goal in the first home game against Southampton but since then his form has dropped horribly that prompted his manager to criticize him publicly.

He is not alone in this trade. There are other good players too who are equally underperforming to a large extent. Here we take a look at five such top players, who are struggling to find their form:

The Iceland international became Andre Villas-Boas’s first signing of the season when he arrived for £6.8 million from the Bundesliga side TSG Hoffenheim.

He had a great season on loan with Swansea and Liverpool manager Brendan Rodgers wanted to sign him as well.

However, with only six league starts out of 22 appearances with no goals to his name (compared to seven goals & five assists in 18 league games for Swansea) surely he has disappointed Tottenham big time.

The 31-year-old wanted to leave the club this summer despite being voted as Norwich City’s player of the year for third season in row.

The club didn’t want him to leave and in the end he stayed and signed a three-year contract extension.

He scored in the last Premier League game against Everton, taking his tally to five goals so far, but is that enough? The same striker who scored 15 league goals last season has failed to provide that spark – though Norwich are sitting comfortably 12th in the table, despite a stuttering start.

The former Rangers striker took the league by storm in the second half of last season, by scoring nine goals in only 13 league matches for Everton.

This season, he started brightly but mysteriously his form dipped horribly.

David Moyes now prefers young Victor Anichebe over him in the starting line-up. With only seven goals in all competitions and no league goals since early December, anybody has any doubts that the 27-year-old is hugely underperforming?

Talk about underperformance and not mention the £50 million striker who has become somewhat of a joke in England, would be a huge joke.

Last season, we could still give Fernando Torres a benefit of doubt. But what about this season?

He has been given the role of playing upfront on his own and his previous mentor has been brought in to galvanize him, but what is the end product? Just seven league goals in 27 matches for Chelsea? Blimey!

Another striker in the list who frankly hasn’t done enough this season.

He had set a high standard for himself after scoring 13 goals in 14 league matches last season.

While very few had expected to encore in that fashion, but very few also expected him to struggle this badly.

Six goals in 25 league appearances? That is simply not enough from a quality striker like him. Also, his poor form is one of the reasons why Newcastle United have performed so badly throughout the season.

Other notable mentions from the Premier League

Manchester United’s Antonio Valencia hasn’t been brilliant and could have easily made that list. Likewise Arsenal skipper Thomas Vermaelen has performed well below his potential while question marks can be raised over the contributions of Emmanuel Adebayor and Michel Vorm for Spurs and Swansea respectively.