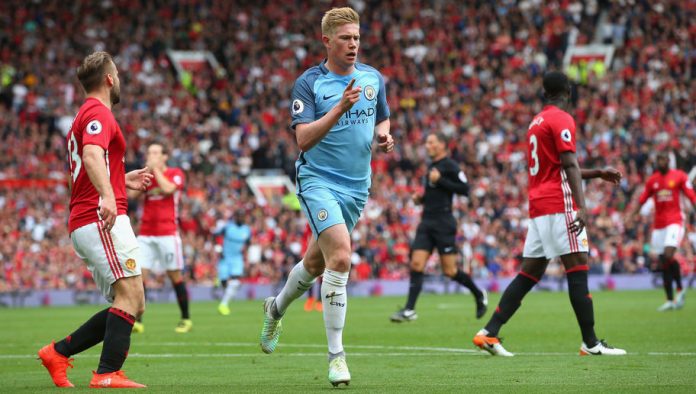 It was another intriguing round of Premier League football after a fortnight off for the international break. Pep Guardiola beat Jose Mourinho in what was the most highly anticipated game of the weekend, while Watford came from 2-0 down to beat West Ham 4-2 at the London Stadium. Below are the 11 players who shone the brightest in the Premier League this weekend.

Only two goalkeepers kept clean sheets in the Premier League this weekend, and the other one was Hugo Lloris, who had very little to do. Boruc made five saves in the victory over West Brom, the most notable of which to deny Gareth McAuley from point-blank range.

Smith has been a consistent performer for Bournemouth since their promotion to the Premier League. He was regularly up and down the pitch, and although it was a brilliant finish from Callum Wilson for the goal, Smith did really well to pick him out.

It’s no surprise that Arsenal have looked much more settled at the back since Koscielny returned to the side after the opening day defeat at Liverpool. The Frenchman was once again impressive at the heart of the defence, and his overhead kick to bring the Gunners level was just spectacular.

Mee is one of the few survivors from Burnley’s last spell in the Premier League, and it is clear that he has learnt from that experience. The centre-back was strong defensively for the Clarets throughout the match with Hull, and it took a brilliant free-kick from Robert Snodgrass to deny them all three points in stoppage time.

It looked like it could be a tough day for Holebas when Dimitri Payet pulled off a wonderful piece of skill to deceive the full-back and set up Michail Antonio to score his second, but it wasn’t to be. The 32-year-old was a threat going forward in the second half, and for the fourth goal he started the move with an excellent tackle on Payet, and then finished the move with a curled shot from the edge of the area.

Maybe Alan Pardew’s £50 million valuation of Zaha was a bit too far, but a few more performances like this and he’ll be a bit closer to that. He put in the perfect cross to assist Christian Benteke for the opener, and then coolly curled past Victor Valdes to get the winner.

Manchester City tore their neighbours apart in the opening 40 minutes of the derby, and de Bruyne was right at the heart of this. Once sold by Mourinho at Chelsea, the Belgian proved his former manager wrong with a sparkling display which included a goal and assist, and he was inches away from adding another in the second half.

Some Liverpool fans will have been worried when they didn’t see Philippe Coutinho’s name in the starting XI to play Leicester City. They needn’t have worried. Firmino kept up his excellent goal scoring record in the Premier League with a double, this time playing in behind Daniel Sturridge as opposed to a role as the furthest man forward.

Things were tough for the South Korean in his first season in England, and there were persistent rumours that Tottenham were willing to sell in the summer. Son proved his doubters wrong on Saturday with two excellently taken goals against Stoke, as Spurs dismantled the Potters.

When Costa is at his best, he is almost unstoppable. This is something that Jordi Amat and Federico Fernandez will have picked up on in the match at the Liberty Stadium, as the Spaniard terrorised the pair for 90 minutes. He took his two goals superbly, the second of which a brilliant acrobatic effort to draw the Blues level.

By his standards, Lukaku has been on a poor run. He had gone 13 Premier League games without a goal, and it seemed he was particularly unhappy at Everton. He reminded us all what he was capable of against Sunderland though, with a second half hat-trick changing the game and winning his side the three points.