The Red Devils new manager Louis van Gaal will take in charge of his first competitive fixture after an impressive pre-season with the 20-time English champions. Soccerlens will take a look at the possible lineup for the game against the Welsh club.

With Jonny Evans being ruled out for the pre-season victory over Valencia, Van Gaal could hand Tyler Blackett a place in the starting lineup, alongside Phil Jones and Chris Smalling. David de Gea as usual will be in between the posts.

Along with Evans, the former Barcelona and Bayern Munich manager even confirmed that summer signing Luke Shaw and Antonio Valencia are also injured. The England international has picked up a hamstring injury and will be sidelined for around four weeks.

The situation is likely to see Van Gaal use Ashley Young as the right wing-back, while Reece James will play on the left wing-back position. After having an impressive pre-season, another summer signing Ander Herrera will partner new United vice-captain, Darren Fletcher in the heart of the midfield.

Juan Mata will play the No 10 role, behind the two strikers. Van Gaal deployed Javier Hernandez and Wayne Rooney for the clash against the La Liga outfit.

The 63-year-old manager is likely to go with the same two players for the game against Swansea, especially with Robin van Persie working on regaining full fitness after his recent holiday following a third place finish with the Netherlands in the World Cup.

Manchester United Possible Lineup v Swansea City is given below 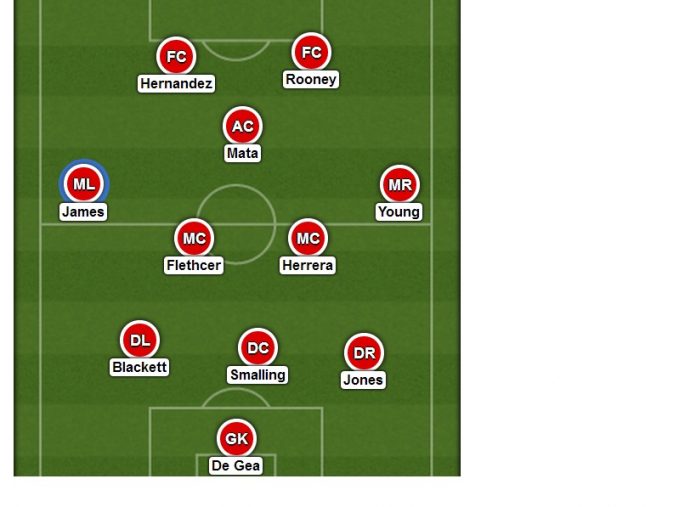 Prediction: 2-0; A comfortable victory for Louis van Gaal on his Premier League debut.