Liverpool will look to get over Tuesday night’s disappointment of missing out on a cup final, when they take on West Ham at Anfield tomorrow.

Following a poor start to the season, the Reds have somewhat steadied the ship and are looking to get back into the mix for the final Champions League spot. Sam Allardyce’ West Ham, on the other hand have made a fantastic start to the season and are sitting above last season’ title challengers, Liverpool.

Brendan Rodgers’ side will be heading into the game knowing that a victory is essential if they are to stay in the hunt for top four. A win will take them above West Ham and closer to Spurs and Arsenal, both of whom will be playing each other next week.

Meanwhile, there is a lot to look forward to for the Liverpool fans, as they are likely to welcome Daniel Sturridge back into the squad this week. The England international has been through an intensive rehab process to battle his recurring thigh problems and will be in the squad to face West Ham. The prolific striker has been a big miss at Anfield as Liverpool have struggled without a clinical presence in front of goal.

Liverpool are however expected to start with Sterling up top with Sturridge starting on the bench. Meanwhile Adam Lallana could come back into the side in place of Steven Gerrard. Mamadou Sakho, who was doubtful for the game is set to join the group in training today and is expected to be fit for the game.

The likes of Moreno, Sterling, Coutinho and Markovic should also keep their places. The Henderson and Lucas duo should start in the midfield with Emre Can and Skrtel starting as centre backs. Although there has been talk of Lovren/Johnson coming back into the squad, Rodgers will be reluctant to change his successful setup of Can, Skrtel and Sakho.

Rodgers’ comments about Mignolet in the press conference pretty much guarantees him a starting berth as the Belgian looks to rediscover his form from his Sunderland days. 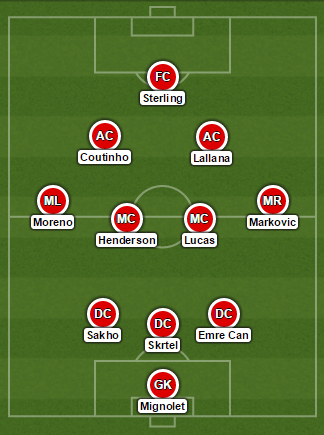