Chelsea face Maribor in the Round three of the Champions League Group G tie at the Stamford Bridge on Tuesday. The Blues, having drawn their last UCL tie against Schalke at home, would be looking for nothing less than full three points.

The task, however, won’t be easy, as Maribor are a compact side who are unbeaten in their last eight matches in the Champions League (including the qualifiers).

Jose: ‘Maribor’s results tell you a lot. Their results away from home have been very impressive. We have full respect for them.’ #CFC

Chelsea may give rest to some of their key players, especially with the crucial Premier League clash with Manchester United coming up next Sunday. 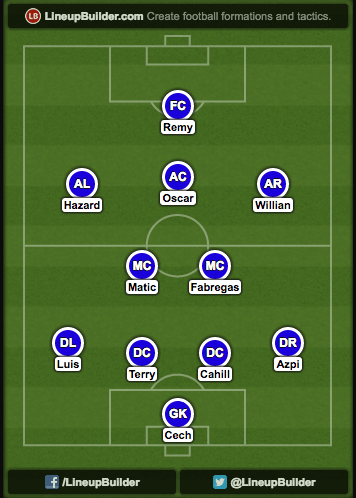 Petr Cech could get a rare start for the Blues in place of Thibaut Courtois. In the defence, Cesar Azpilicueta, who would miss the next Premier League clash due to suspension, may start in the right back role in place of Branislav Ivanovic.

Ramires returned to training today but Mourinho has confirmed that the Brazilian won’t be fit enough to play tomorrow. Also, John Obi Mikel is likely to miss out with a foot injury. Willian may retain his place after Mourinho has ruled out Andre Schurrle for this tie as well. In the attacking department, Chelsea will continue to miss star striker Diego Costa through injury.

Jose: ‘Didier Drogba is not in condition to play 90 minutes but he can play. Dominic Solanke will be on the bench tomorrow.’ #CFC

Loic Remy started against QPR and the French striker should retain his place tomorrow. Chelsea need to win this game in order to consolidate their position in the group and I expect a comfortable victory for the home side. Prediction: 2-0