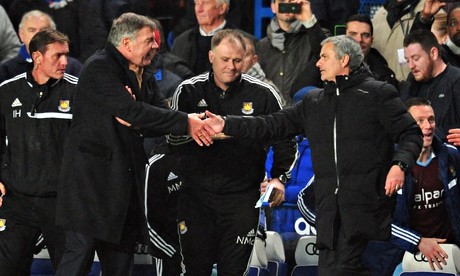 Newly-crowned League Cup champions Chelsea hardly have any time to rest as they turn their attention back to the Premier League on Wednesday. Just three days after their win over Spurs at Wembley, it is another difficult London derby that awaits them, as they make the trip to the Boleyn Ground to take on West Ham United.

With the confidence of having won silverware though, this group of Chelsea players is only expected to go from strength to strength. They are five points clear at the top of the Premier League table, and even have a game in hand over second-placed Manchester City. Their destiny is firmly in their own hands, and with 12 games left to go, they are inching ever closer to regaining the crown they last won in 2010.

Their opponent West Ham are struggling for form. From being genuine contenders for the Champions League spots a couple months back, they are languishing in 9th following a five-match winless streak. Their home record which is usually very sound, was severely dented at the weekend when they were beaten 3-1 by Crystal Palace. The Hammers are extremely low on confidence, and have picked the wrong time to face a side riding as high on it as Chelsea.

Mourinho has said in his pre-match press conference that he will not be playing the same XI that played against Spurs. With the large number of options at his disposal, he has the luxury to name a frighteningly strong line-up even after dropping a couple of regulars. The only certain absentees are Nemanja Matic and John Obi Mikel, who miss out through suspension and a knee injury respectively. The manager gave the following update on the Nigerian’s recovery:

Jose reports John Mikel Obi had a small knee operation a week ago and may be back in the first week in April. #CFC

Thibaut Courtois is set to return in goal. Kurt Zouma, who was surprisingly played in midfield on Sunday, could be given a rest for this one. Also, Cesar Azpilicueta, who suffered a bloody head and needed a plaster during the Capital One Cup final, is likely to be replaced by Filipe Luis. Ramires and Cesc Fabregas are the only options in the two-man pivot, while Oscar, who was benched in the final, will certainly start. Juan Cuadrado could also be preferred in place of Willian.

The following is the possible Chelsea starting line-up vs West Ham United: 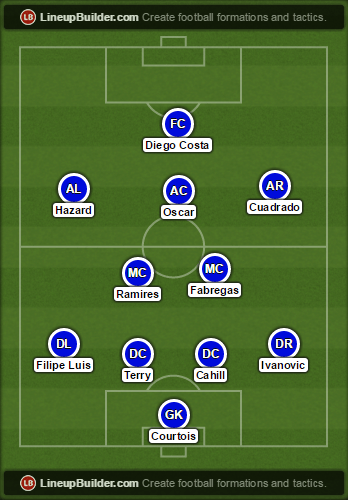 While a hangover from Sunday is a possibility, Mourinho will have made sure that his players don’t over-celebrate and concentrate on the task at hand. West Ham’s form of late offers no real reason for their fans to be optimistic. They have though, beaten Manchester City and Liverpool at home this season. Chelsea will know this is a tough game, and will need to be at their best to come away with maximum points.