Chelsea have already won Group G and go into Matchday 6 having the luxury of resting some first-team players for a busy month ahead. The visitors to Stamford Bridge on Wednesday are Sporting Lisbon, who are in the race to finish second in the group, along with Schalke. The Portuguese outfit currently occupy the second qualifying spot, and need a draw to guarantee a passage through to the knockout stages.

Chelsea though, despite not fielding their strongest team, will not make it anywhere near easy for them. The Blues suffered their first defeat of the season at the weekend in the Premier League against Newcastle United, and manager Jose Mourinho will want a reaction from his players.

Chelsea do not have any injury concerns, but Mourinho will give chances to several individuals to prove their worth. The manager has confirmed in his press conference that Willian, Eden Hazard and John Terry will be given the day off, and 18 year-old youth product Ruben Loftus-Cheek will play some part in the game. Petr Cech is expected to start in goal ahead of Thibaut Courtois, and Kurt Zouma is expected to play in place of Terry.

Mourinho has confirmed that Diego Costa and Nemanja Matic, who have both had days off in the last week, will start, along with Cesc Fabregas. The Spaniard is suspended for the weekend’s Premier League clash against Hull City. Mohamed Salah and Andre Schurrle are both expected to play, along with Oscar.

The following is the possible Chelsea starting line-up vs Sporting Lisbon: 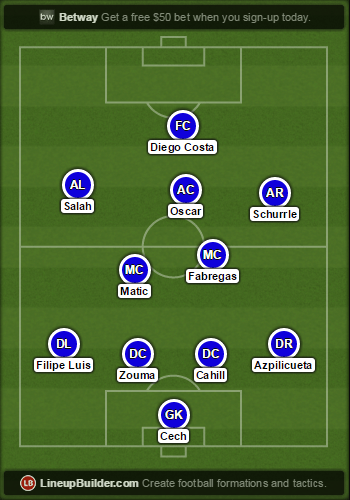 Even with their second-string side, Chelsea are a formidable opposition for Sporting to have to gain a point out of. The visitors need the result much more than the Blues, but Mourinho will want the winning habit to return to his side in front of the home fans.

Here are the highlights to the reverse fixture played in the Portuguese capital on Matchday 2, where Chelsea ran out 1-0 winners: