Chelsea have got off to the perfect start this season, winning both their opening games of the campaign. Manager Jose Mourinho fielded the same starting XI in both the games.

But both those games were against newly-promoted sides and Chelsea dominated proceedings throughout. Now, the Blues face by far their toughest assignment yet, as they travel to Goodison Park to take on Everton on Saturday.

Mourinho will want to start the same set of players that beat Burnley and Leicester, but we will see a couple of changes due to both injuries and tactics. The Toffees are an extremely tough team to beat, especially on their own turf. Goodison Park hasn’t been the happiest hunting ground for the Blues in recent seasons, and it was at this same venue that they suffered their first defeat in the last campaign.

Chelsea will need steel and energy in midfield, and that is where we might see changes made. This may be the game when the 4-3-3 is adopted for the first time by Mourinho. 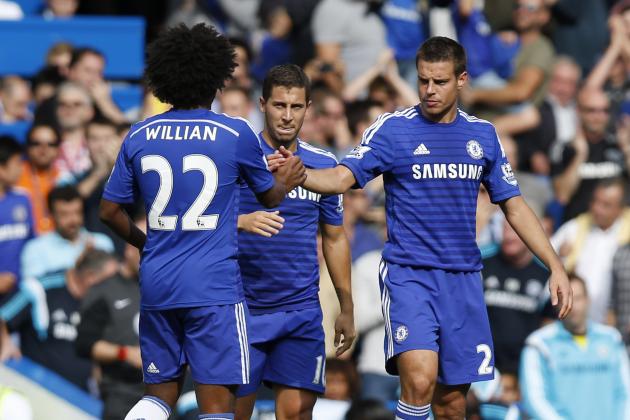 Nemanja Matic and Cesc Fabregas are sure-starters, and we may see Ramires feature for the first time in the starting XI alongside the duo. The Brazilian will be a valuable asset in a game such as this with his boundless energy and constant running.

Diego Costa is a major doubt for this game after injuring his hamstring in training yesterday, and with Fernando Torres set to join AC Milan, we may see Didier Drogba start for the first time. There is also the possibility of Andre Schurrle being given a false 9 role, but that may well be done later on in the game.

Willian looks a more likely option on the wings than Schurrle, who has started both the games thus far. Oscar, due to circumstance, may be dropped.

Everton have let leads slip in both their games thus far and have just 2 points. Getting their first win of the season against title-favourites Chelsea will therefore be a major achievement for Roberto Martinez’s side. The Blues are certainly weakened by Diego Costa’s absence, and Everton will want to take full advantage of a side that may struggle to score goals.

It will be interesting to see Romelu Lukaku and Samuel Eto’o line up against their former employers. The latter of the two was only signed earlier in the week and will be looking to make an instant impact. Lukaku was signed for a club-record fee of £28 million earlier on in the summer and the Belgian will want to make a strong point to the club that deemed him not good enough.

Everton 1-2 Chelsea: Even though Diego Costa is absent, there are goals all over the pitch in this Chelsea side. Everton have been sloppy defensively thus far this season and even though they are a formidable side at home, Chelsea will have too enough firepower to win this one.