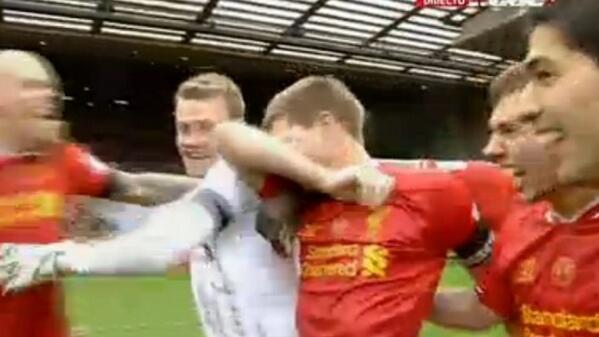 Steven Gerrard was is tears after the match, as Liverpool moved one step closer to clinching the Premier League title for the first time since 1990, after they defeated Manchester City 3-2 at the Anfield.

Anfield soaked in a special occasion today, as the Reds fans remembered the 25th anniversary of the Hillsborough tragedy.

Liverpool took the early lead when Raheem Sterling showed great composure inside the box and finished with great aplomb, after picking up a nice through-ball from Luis Suarez.

Martin Skrtel doubled the lead for the Reds, when the Slovakian headed in from a terrific Steven Gerrard’s corner.

City fought hard and created good chances towards the end of the first half. They pressed hard and got two quick goals in the second half through David Silva.

However, with the tension slowly engulfing the Anfield crowd, Coutinho pounced on a mistake from Vincent Kompany to give Liverpool a precious victory.