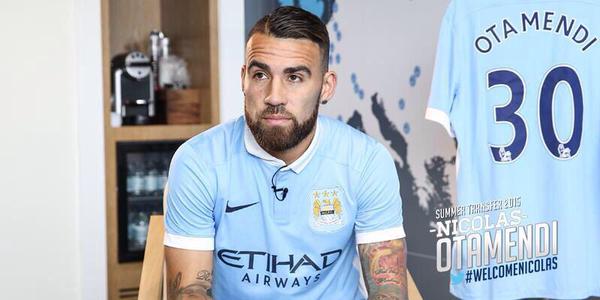 Manchester City have announced the signing of Nicolas Otamendi from Valencia.

Otamendi has been linked with a move to Manchester United all summer, but cross-town rivals City have swooped in late to secure the services of the Argentine for the next five years.

Otamendi enjoyed a phenomenal season with Valencia last year and was widely regarded as the best defender in the world alongside the likes of Pique and John Terry. With two big money additions in Raheem Sterling and Nicolas Otamendi, City will now be hoping to secure their Premier League crown this season.

Otamendi expressed his delight at joining City and manager Manuel Pellegrini also had a lot to say about his new signing.

Otamendi said: “I am here to give my best, to fight game by game and push City to the highest peaks for as long as possible, and I wish we will be able to win several cups and titles.

“That’s the most important. To be here inside a club that looks so wonderful from the outside is a dream.”

Manager Manuel Pellegrini added: “Nicolas Otamendi was arguably the best defender in La Liga last season and so naturally I’m delighted to have added a player of his quality.

“He is an established international for one of the best nations in world football and I have no doubt that he has the right mentality to fit into a squad where he will find many familiar faces, including Eliaquim and Fernando who he played alongside in Portugal.

“As a footballer, Nicolas has all of the qualities to be a success in the Premier League – he’s strong, he’s excellent in the tackle and he’s very good technically.

“I am sure he will become another Argentine player our fans will enjoy watching.”

Valencia have confirmed the departure of Otamendi as well and wished him luck.