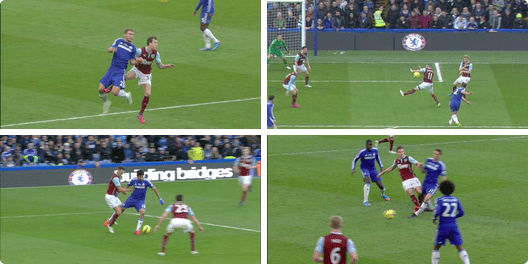 For the past few months, Chelsea manager Jose Mourinho has been saying in the press that there has been ‘conspiracy’ going on against his team.

Mourinho criticised Sky Sports for their coverage over Nemanja Matic’s sending off against Burnley. The Portuguese felt Barnes should have been sent off for his “criminal tackle” on Matic, a reaction to which the Serbian was given the marching orders.

The Chelsea manager highlighted four crucial moments that went against them during the 1-1 draw against Burnley in the Premier League.

Taken from Chelsea official website. You can check the video as well.

Branislav Ivanovic is felled by a challenge from Burnley’s Ashley Barnes [pictured above], who escapes punishment.

The Blues are denied a clear penalty as Ivanovic‘s shot strikes the arm of Michael Kightly inside the penalty area.

A second clear penalty appeal is turned away, this time after Diego Costa was pushed to the ground by Jason Shackell.

Barnes goes through Nemanja Matic with a potentially leg-breaking tackle, a challenge which ultimately led to Matic‘s dismissal.