What a year this has been for Manchester United. The Red Devils became Premier League Champions for the 20th time, legendary manager Sir Alex Ferguson retired after more than two decades in charge, appointment of David Moyes, special season from Robin van Persie – the list can go on.

Let us take a look at the three special moments of 2013 for Manchester United:

It was a special night. A blockbuster in truest sense. Whatever way you see at it. Manchester United vs Real Madrid – two European heavy weights – these sort of fixtures doesn’t come regularly. Then, there was the return of Cristiano Ronaldo to Old Trafford for the first time since he left the club, Ferguson’s last European match, the controversial decision in sending off Nani – it was a special occasion. And certainly, not many times you hear Jose Mourinho saying after the match the better team has lost.

What a remarkable day that was. Sir Alex Ferguson retiring from football management after creating a dynasty at Old Trafford, while Manchester United players celebrating their 20th league title. What a way to say goodbye! 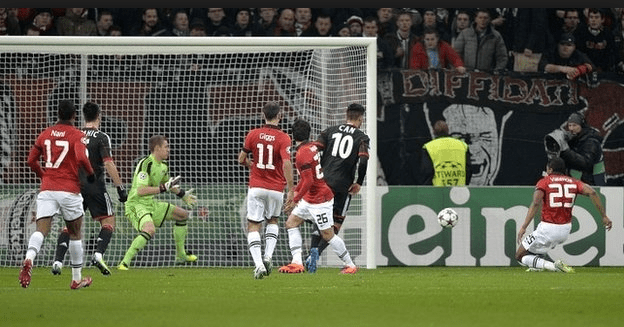 Most memorable victory for David Moyes in his short career at Old Trafford. Getting such a result, away to Germany in the Champions League was immense. Whether or not, he will be a success at Manchester United remains to be seen, but this has to be one of the best away performances by the Red Devils throughout their history.