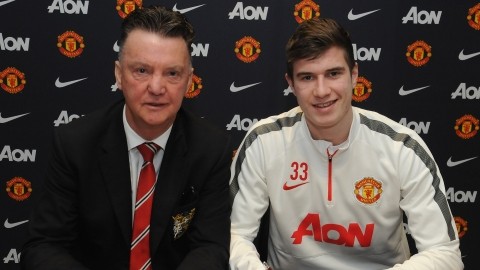 Manchester United have confirmed their defender Paddy McNair has signed a new deal to extend his stay at Old Trafford till 2017 with an option to further extend it by a year.

The 19-year-old had less than six months in his earlier contract and made it to the first team under the guidance of Louis van Gaal this season. He has now committed his future to the 20-times English champions.

Paddy McNair has signed a new contract at #mufc until June 2017 with the option of a further year. pic.twitter.com/SeRYozoMAb

“Paddy McNair has signed a new contract at Manchester United which keeps him at the Club until at least June 2017 with an option to extend for a further year,” a statement read on United’s official website.

After signing the new contract, McNair said, “To make my debut for this great club earlier this season was a dream come true. I’m pleased to have signed a new contract. I have come through the Academy here and I feel I am improving my game all the time with the help of the manager, the coaching staff and my team-mates.”

The former Barcelona and Bayern Munich manager was expressed to tie down the future of the young defender to the club.

“Paddy has risen through the ranks to become an integral part of the first team squad. He has all the attributes to develop into a top player. Promoting youth players is very important both to myself and to the club and I am delighted Paddy has signed a new contract,” Van Gaal explained.