Fulham have confirmed the signing of Greek striker Konstantinos Mitroglou from Olympiakos.

The 25-year-old striker has signed a four-and-a-half year deal at Craven Cottage after Fulham agreed to pay the Greek team upwards of £11m for his services.

Mitroglou was about to facing Manchester United in the last 16 of the Champions League, but now he has opted for a relegation fight instead.

He has been in great goal scoring  form this season and became the first Greek striker to score a hat-trick in the Champions League. 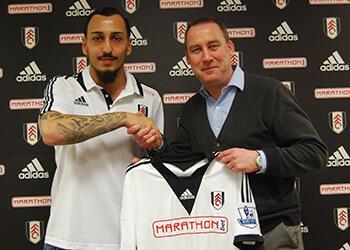