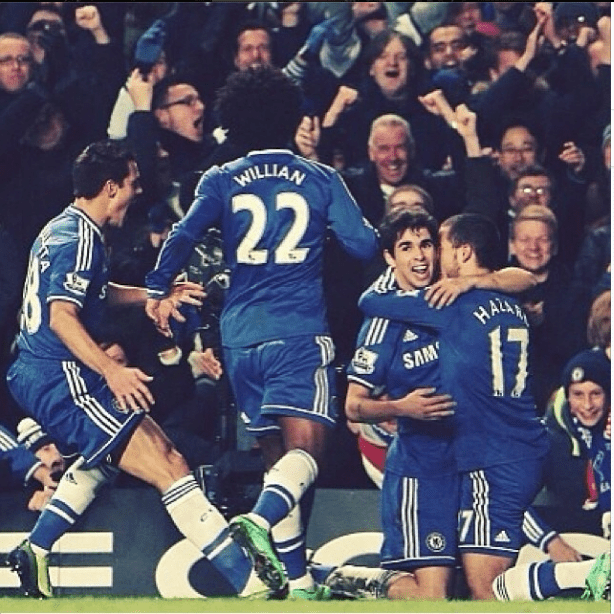 Chelsea end 2013 on a high after the Blues came from behind to earn an emphatic 2-1 victory over Liverpool at the Stamford Bridge on Sunday. The victory took them to third in the table, just two points behind league leaders Arsenal.

Liverpool took the lead within 5 minutes, when Martin Skrtel poked the ball in from close range, after Chelsea defenders failing to clear yet another set-piece. But, from there on, the Blues took the control of the game and scored twice, first through Eden Hazard, and then Samuel Eto’o, to earn full three points against the Reds.

Some of the players expressed their joy on Twitter. Defender Cesar Azpilicueta tweeted after the match:

Great victory to end the year!! Thanks for your support!!! Happy new year! #cfc pic.twitter.com/zN2CvxTPpw

Brazilian defender David Luiz posted a picture of him celebrating with his team-mates. He hailed the win as a “Great Victory”.

Another Brazilian Willian posted a picture on Instagram of him celebrating with Oscar and Hazard. He tweeted: