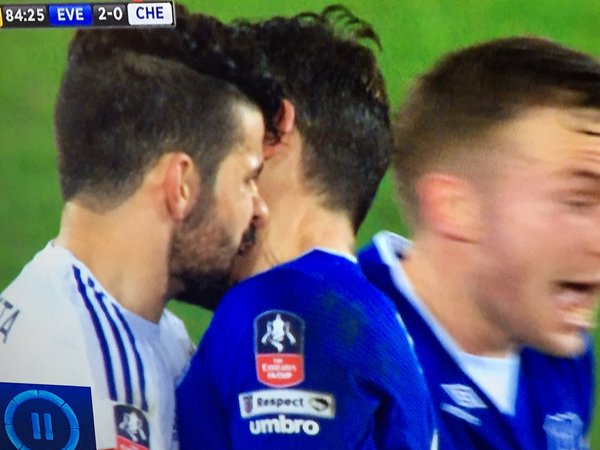 Diego Costa was given the marching order in the 85th min, after picking up two yellow cards during the match. However, the major talking point is probably Costa’s reaction prior to the sending off, where he appeared to bite Gareth Barry’s neck.

Check the picture below…

Check the video as well:

Costa is changed & waiting outside for Barry … Not sure if he’s going to twat him or shag him after that love bite pic.twitter.com/tZvE4SKika

Look on Costa’s face after the ‘bite/nibble’ was definitely one of ‘oh shit’. Feel there’ll be just enough doubt tho https://t.co/aXkAJQV79E

Looked more like a cheeky kiss than a bite from Costa. The little rascal. ?

Bite or no bite? #Costa
Costa can nibble
Lukaku can dribble

Looks like a little bite in there, plus confronting the referee. Could and should be a lengthy ban for Costa and not before time.

Of course Costa was after a chunk there, it was Dracula-esque.