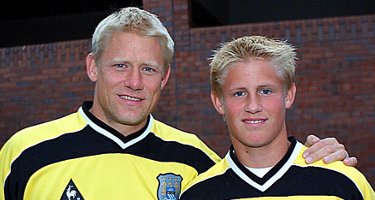 Leicester City goalkeeper Kasper Schmeichel became a club legend after helping the Foxes to an unlikely Premier League triumph in the 2015-16 season, and now boasts of an English top-flight winners medal like his father Peter Schmeichel.

The Manchester United legend won five Premier League titles, three FA Cup titles and a Champions League during eight seasons at Old Trafford, and he’s widely regarded as one of the greatest goalkeepers the club and league have ever had.

Despite following in his dad’s footsteps and also becoming a Denmark international, not many will agree that Kasper has reached the heights Peter did.

Schmeichel senior was asked if he would have loved to see his son play for United, and here is how he replied.

“I enjoy seeing Kasper playing for Leicester City. I think what they’ve done is fantastic and he’s one of the pillars of that club,” Schmeichel told beIN SPORTS.

“Of course I’d have loved to see him play for Manchester United but I just want my son to be happy where he’s playing and he’s playing well.”

Without a doubt, Peter will be very proud of seeing his son in United colours, but he’s equally happy that Kasper has managed to do very well for himself too at the King Power Stadium.

The 32-year-old started his career at Manchester City after three years within the youth ranks, but he spent the majority of his time developing on loan at Darlington, Bury, Falkirk, Cardiff City and Coventry City.

Schmeichel later spent a season each at then League Two side Notts County and Leeds United before moving to Leicester in the summer of 2011.

He helped them to Premier League promotion three seasons later and has since established himself as one of the best goalkeepers in the division.