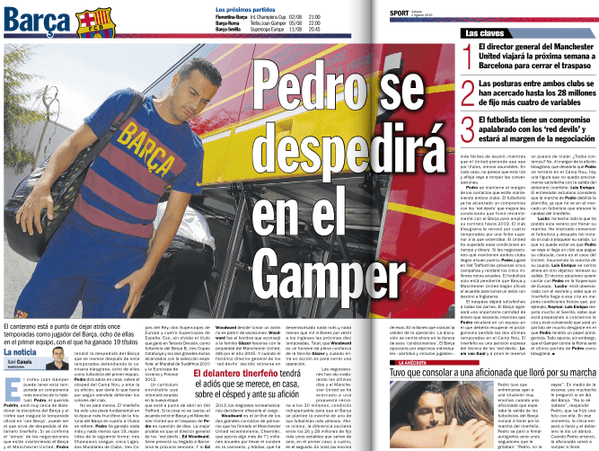 Barcelona are still adamant that the club will not sell their home grown player Pedro Rodriguez in the summer. However, going by the media report, it seems, the ‘Pedro transfer to Manchester United’ is now only a question of when.

Barcelona fans more-or-less have come to accept the fact that Pedro will be leaving the club. The sole reason being the Spaniard wants to play regular football again. Luis Enrique has failed to assured him regular football next season, and it seems, Pedro is ready to sacrifice his emotions (being at the club for over a decade) to move abroad to start a new chapter in his footballing career.

According to Catalan newspaper Sport, Pedro’s move to Manchester United is as good as done, only few formalities are left to make the deal official. They claim United have offered a package of €32m (€28m + €4m add ons) for Pedro, and that the preparations for his farewell are underway. The newspaper adds that Pedro could bid farewell at the Joan Gamper Trophy game versus Roma, which takes place this coming Wednesday.

Another Catalan based newspaper Mundo Deportivo, feels the transfer is imminent but unlike Sport, they claim, United will be looking to wrap up the signing within 10th August, a key date for negotiation, as that’s when Barcelona will fly out to Tblisi for the European Super Cup and the final day United can register players for CL play-off.