Serie A champions Juventus have made it clear the club won’t sell Paul Pogba in the summer. The Frenchman has enjoyed another great season with the Turin giants, and has played a key role for the Bianconeri in securing their fifth consecutive Scudetto this season.

Not for the first time, Pogba has attracted an interest from a host of top European clubs, but Juventus are looking to hold on to their star midfielder beyond the summer.

Italian newspaper Tuttosport’s front page headline on Thursday reads: “Pogba is not for sale. Marotta takes the Frenchman and Dybala off the market.” 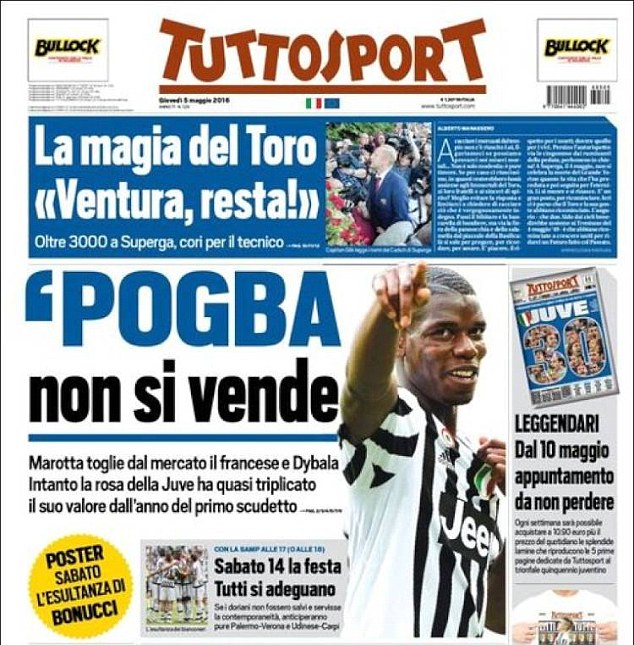 Juventus general director Giuseppe Marotta has admitted that Manchester City had tabled an offer for Pogba last summer, but their advances were rejected outright.

La Liga champions Barcelona also had reportedly made an offer for Pogba last summer, but a transfer embargo meant the deal never materialized. The Catalan club had tabled a mouthwatering €85m bid for the French international, but it was rebuffed, with Juventus looking to settle for a fee in the region of €100m.

Barcelona’s parlous financial condition has left them in an unfavourable position to invest around €260m on Pogba (including his proposed wages spread over five years and the fee of his agent) and therefore a potential move to the Premier League could be on the cards for the former Manchester United midfielder.

Pogba is often linked with a move to Chelsea, and the appointment of Antonio Conte, the former Juventus manager, will certain to add more fuel to the speculative fire on the 23-year-old star’s possibility of joining the Blues. However, with Chelsea failing to qualify for the Champions League next season, any potential move to Stamford Bridge for the Frenchman in 2016/17 is almost out of the question.

Mino Raiola, Pogba’s agent, has stated that his client won’t move to Chelsea any time soon, as noted by respected journalist James Horncastle.

Raiola on Pogba: Chelsea? Not now

Meanwhile, in other Chelsea news, the new Chelsea 2016-17 home kit was launched this week. Sponsored by Yokohama Tyres, the new home kit manufactured by Adidas comes in the club’s traditional blue colour, featuring a white v-collar with blue trim.

The new Chelsea 16-17 home shirt, is available for pre-order at £90, and the players will wear it for the first time against Leicester City in Chelsea’s final Premier League game of the season at Stamford Bridge.