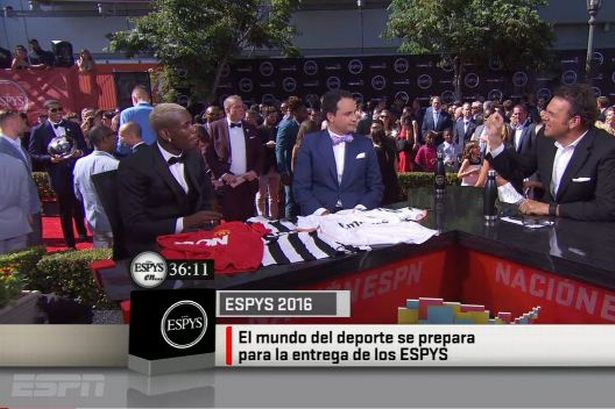 ‘Will Paul Pogba join Manchester United?’ is the question that is being asked by fans and bloggers across the world for the past two or three weeks. Manchester United have either made / preparing to make a record-breaking £100m bid for the Frenchman as Jose Mourinho is reportedly keen to bring the Frenchman back to Old Trafford.

Pogba teased Manchester United fans over a possible move to Old Trafford after he received a United shirt during the ESPYs 2016 awards from ESPN broadcasters in Los Angeles.

Pogba described Juventus as ‘my team, my family, where I am playing, I am very comfortable’.

When asked to comment on Manchester United, he described as the club as “his first family”. He was clever enough to answer all transfer related questions diplomatically. When pressed on a possible return to Old Trafford, Pogba replied: “I don’t know. We’ll see, we’ll see.”

From this little chit-chat, one thing is pretty clear: the interest from United seems genuine and Pogba knows that too, otherwise, he would have straightaway rejected such claims.

When asked what would he do if Jose Mourinho telephoned him to make a swift return to Old Trafford, he said “I don’t know. Let’s see. For the moment I’m at Juve and I’m happy. I don’t know where I want to go.”

The best answer of the lot was when he was asked which of the three replicas he would prefer to wear. “I’ll take three,” he replied.