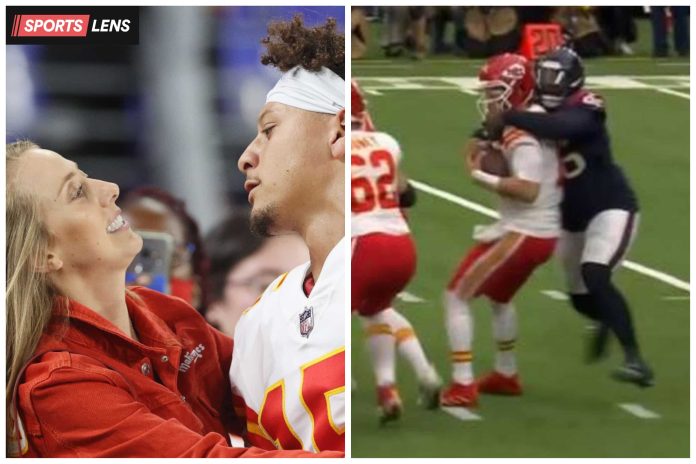 The wife of Kansas City Chiefs quarterback Patrick Mahomes was quick to criticise the referee following Sunday’s Week 14 clash with the Texans, where her husband was violently whipped to the ground without repercussions.

The Chiefs registered their seventh win in eight games to further consolidate their position at the summit of the AFC West, prevailing with a 30-24 overtime victory following after a surprisingly even contest.

Running back Jerick McKinnon grabbed the headlines with a winning touchdown after charging through for a 26-yard rush to save Kansas‘ blushes, adding a second touchdown of the afternoon.

However, Patrick Mahomes, who yet again proved why he is a frontrunner on NFL betting sites to add a second MVP award, registered 36 for 41 along with 336 passing yards, a rushing touchdown and two scoring passes.

However, a brief silence fell among Chiefs fans at the NRG Stadium when defensive tackle Maliek Collins inflicted a savage whipping sack on Mahomes, pulling him to the ground in what looked to be an illegal tackle.

See the footage below for yourself.

Similar tackles witnessed throughout the season have resulted in roughing the passer calls, with the NFL eager to stamp out potentially concussion-leading plays following heavy criticism over head injury protocols.

Miami Dolphins QB Tua Tagovailoa was subjected to two separate concussions earlier this season, promoting a tsunami of criticism from the NFL community.

Mahomes’ wife Brittany, who is a National Women’s Soccer League club owner, took to Twitter to vent her frustration at the absence of penalty following the sack, labelling the inconsistency among referees as ‘BS’.

Im confused, we are allowed to tackle quarterbacks like that now? Got it. The inconsistency is BS

I’m tired of the dirty hits

Roughing the passer decisions have been a hotly-debated topic this season, particularly in Week 5 when two separate incidents were called into question with fans and experts bewildered at the lack of a resulting penalty.

“The NFL has got to step in here. We have a real problem.

Although mid season changes were ruled out by the league itself, a review of the rules and the efficacy of the referees is expected to take place in the near future.