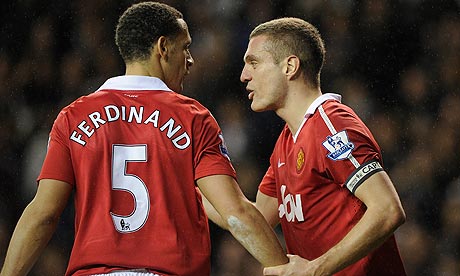 The Serbian defender and the former England international’s contract at the club expires on June 30. Vidic has already agreed a pre-contract agreement to join Inter Milan next season after denying to sign a new deal.

Meanwhile, Ferdinand was reportedly informed in the away dressing room after United’s last league game against Southampton that does not have a career with the Red Devils. The former United full-back, Neville believes it was a big risk to let the experienced defenders leave Old Trafford.

“And I think if we’re signing a new centre-back coming from a different country who hasn’t played here before, the idea of having a stalwart there would help. I think it’s a risk. But we’ll see how that pans out.”

With Vidic already confirmed that he will join the Serie A outfit, Ferdinand is yet to find a new club.

Earlier this month, the former Leeds United centre-back expressed his desire to play professional football for three years as he was eyeing for a new deal.

“I’m enjoying my football so I’ll definitely be playing on for another year, hopefully two or three more.  But I’ll take it year by year and hopefully another year,” Ferdinand told BT Sport.

The 35-year-old has been linked with a move to newly promoted Premier League side Queens Park Rangers. However, the Hoops manager Harry Redknapp has played down the speculation linking both Ferdinand and Frank Lampard, with the latter being released from Chelsea.

“I’d be very surprised if Chelsea don’t keep him anyway – he’s just been such a fantastic player,” Redknapp explained.

“Rio’s now a free agent but I’m sure he’s going to have so many offers. Again, I love Rio, I signed them both as 15-year-olds but the chances of getting them to QPR are very slim.”