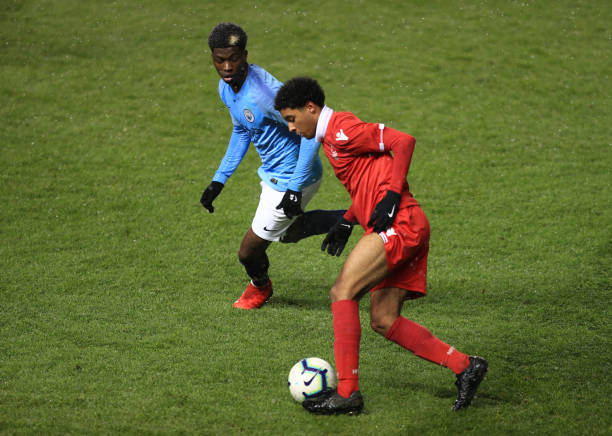 According to The Sun, highly-rated Manchester City teenage midfielder Taylor Richards is set to leave the Etihad Stadium this summer, with Inter Milan one of his potential destinations.

The 18-year-old has been compared with Belgian midfielder Kevin de Bruyne due to his skills, and Everton should move to offer him a Premier League lifeline.

Richards has been with City under-23s since he was 16, and the highly-rated youngster was the club’s top scorer in the UEFA Youth League last year, while he also helped the under-18s to a Northern Premier League.

Toffees’ manager Marco Silva and Director of Football Marcel Brands are keen on recruiting and developing young players, and with City potentially about to make another Jadon Sancho error, Everton shouldn’t hesitate to pounce on Richards.

Manager Pep Guardiola recognizes the teenager’s huge potential and has invited him to train with the first-team regularly over the past season.

However, a lack of playing opportunities given the quality available at City is likely to force Richards towards the exit, and Inter are confident that he could be the next big thing after Sancho announced himself to the world at Borussia Dortmund a season after his City departure.

Manager Antonio Conte’s side will hope to secure his services after AS Monaco had a bid knocked back last summer, but they face competition from several English teams who are all monitoring the player’s situation closely, and Everton should also join the race.

Richards will cherish the opportunity to play in cup games, and the chance to work with Silva who has improved the likes of Richarlison and Dominic Calvert-Lewin could also excite him.

The Portuguese told the club’s official website last September that age isn’t a factor when he chooses his team, and if the City starlet can impress him, he definitely would be given the chance to prove himself on the pitch.

Manchester United midfielder Paul Pogba is a fan of the London-born youngster and has watched him play for City’s Under-23s on several occasions.

The former Fulham Academy player can go on to become the next teenage sensation, with his great vision, quick feet and a keen eye for a goal qualities that set him apart from his peers.