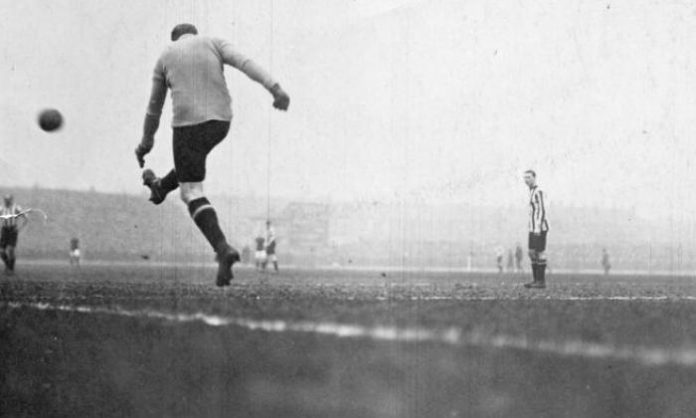 On this day in 1894, Rangers beat Celtic 3-1 in the Scottish Cup final in what was the first Old Firm tie in the final of the competition.

The two Glasgow giants had met once in the league that season with Rangers emerging 5-0 winners and John Barker scoring a hat-trick. Barker struck again in the Cup final while Hugh McCreadie and John McPherson added two more to give Rangers a comfortable 3-1 victory over their rivals. This was Rangers’ first taste of success in the Scottish Cup.

However, Celtic got their revenge a week later by winning 3-2 in the league and going on to lift the league title at the end of the season.

On this day in 1934, 72,841 fans graced the stands at Hillsborough setting a new attendance record at the stadium.

Sheffield Wednesday hosted Manchester City in an FA Cup 5th round fixture. The match ended in a 2-2 draw and a replay had to be scheduled. City won the replay and went on to win their second ever FA Cup.

On this day in 1957, Real Madrid beat Deportivo La Coruna 1-0 at the Santiago Bernabeu in a league tie kick-starting the beginning of a record 121-game unbeaten streak at home in the league.

Real had been beaten by rivals Atletico Madrid at home two weeks earlier but won their remaining home games that season to clinch the league title. What seems to be quite unfathomable, Los Blancos made the Santiago Bernabeu a fortress for the next eight years and stayed unbeaten at home for 121 games and won six league titles. Only eight games out of those 121 resulted in draws as they won the remaining 113 games.

The streak was ended by their perennial nemesis Atletico who won 1-0.