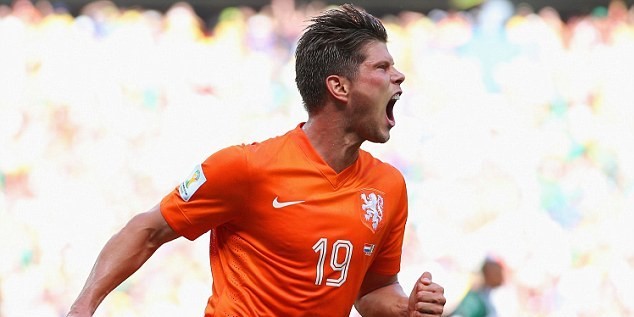 The Netherlands managed to come back from a goal down with only two minutes remaining to beat Mexico and reach the quarter finals, with Klaas Jan Huntelaar’s stoppage time penalty sending Louis van Gaal’s side through.

It had looked all the world like Mexico were to win by a 48th minute Giovani dos Santos strike, with Holland running out of time in the Estádio Castelão, but thanks to the introduction of Huntelaar, the Dutch were able to claw victory back from the jaws of defeat.

The Schalke 04 striker first set up Wesley Sneijder to hammer home the equaliser on the 88th minute, before veteran defender Rafael Marquez brought down Arjen Robben in injury time to give Huntelaar the chance to send his side through.

Accurately placing the ball to the right of goalkeeper Guillermo Ochoa, Huntelaar and his teammates celebrated wildly, with their great escape complete, and a quarter final berth against with either Costa Rica or Greece to come.

The game will be remembered largely for the antics of Robben, with the Bayern Munich star hurling himself to the ground on numerous occasions in an attempt to extract a spot-kick from the referee in the scorching Fortaleza heat.

The 30-year-old winger has arguably been the player of the tournament so far in South America with his devastating speed and trickery, but his penchant for simulation has come out in spades, with the majority of spectators up-in-arms over his ‘dive’ for the late penalty that won the match in the Estádio Castelão on Sunday.

What do you think? Was it a penalty, or was Robben ‘crying wolf’ once again?