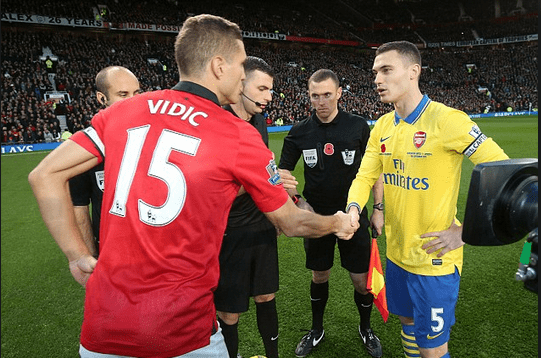 Manchester United host this season’s English Premier League title challengers Liverpool at Old Trafford on Sunday, and interim manager Ole Gunnar Solskjaer will be looking to make a great statement of intent by handing the visitors their second league defeat of the campaign.

The Norwegian is said to be considering inviting former Red Devils boss Sir Alex Ferguson to come give the team talk ahead of the clash between arguably the two biggest rivals in the top-flight.

Former United centre-back Nemanja Vidic has given a hint on what to expect from the legendary manager, though.

Vidic told Independent that Ferguson would spend the build-up to United’s clashes with Liverpool trying to calm the players down rather than charge them up, but that didn’t prevent him from getting sent off on four different occasions.

“He didn’t want to put that much pressure on the players,” the former defender disclosed.

“For me, I think he wanted more to relax me than to encourage. Because I did some stupid things against Liverpool.”

It comes as a surprise to know that instead of charging his players up given the bitter rivalry between both sides, Ferguson opted to calm them down in order for them not to lose their heads.

It remains to be seen what he will be telling Paul Pogba and co. on Sunday, but Solskjaer will really hope his speech can inspire the players to much-needed and morale-boosting victory over Liverpool.