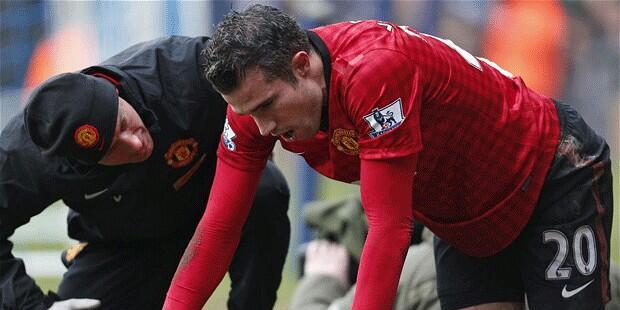 With the news that star striker Robin Van Persie will be out of action for at least a month, Utd fans will be wondering what else could possibly go wrong for the champions.

Currently languishing in 9th place in the Premier League, and with consecutive 1-0 home defeats at the hands of Everton and Newcastle respectively; it has been a disastrous winter so far for the Red Devils, and the Van Persie injury couldn’t have come at a worse time.

Questions will be asked of David Moyes, and why his main man has suffered another injury so soon after recovering from a groin strain; an injury that had kept the Dutchman out of the side for the previous three league matches before last weekend.

Dutch fitness coach, Raymond Verheijen had been critical of Moyes’ decision to play Van Persie for the full 90 minutes in the defeat to Newcastle:

Btw, how on earth did RVP play the full 90 minutes today after being injured for a month? Don’t be surprised if RVP picks up new injury soon

Indeed, perhaps Moyes should have been more careful with Van Persie, considering his poor injury record in the past; but regardless of blame, there’s no denying that this is a huge blow to Man Utd’s title challenge.

What do you think? Is this Moyes’ doing? How will United cope? Let us know in the comments below…