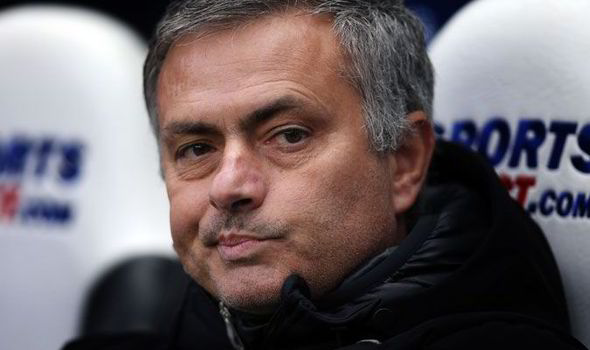 José Mourinho was pleased with his side’s second half performance in Chelsea’s 2-0 win over newly-promoted Leicester City today but knows there is room for improvement after the two sides went in at half-time deadlocked.

The Portuguese manager branded his side “lazy” in the first half before they came out firing in the second 45.

Mourinho was not overly impressed, saying the weather played a part in his side’s first half performance:

“I prefer to train in the morning, but this week I trained in the afternoon because this is not the best weather to play football, you get lazy.

“This weather pushes players to be a bit lazy, to lose a bit of tension, a bit of sharpness, after that you pass slow, you do not react to the second balls, the time goes on and on, then when you wake up, it is half-time.

“In the first half, the team were lazy, and I did not like that. But they improved in the second half and they won, which is the most important thing.”

After Oscar had struck the inside of the post and Branislav Ivanović had tested Kasper Schmeichel, Leicester City had the best opportunity to open the score when David Nugent raced through on goal. The one-time England international saw his low effort diverted out for a corner by Thibaut Courtois.

In his post-match interview, Mourinho revealed the discussions he had with his players at half-time:

“At half-time, we had to be a bit emotional with them. I told them the way we were playing was not good enough to win the game and that we were at risk. It is impossible to play football if you do not win one second ball, it was basic but important things.

“I told them if you have the same feeling and vision I have, we are not in trouble, because we change, but if you do not agree, we are in trouble and do not win the game. In the second half, it was better we were a positive and enthusiastic, so we were too strong for them. But let’s not forget that they had a one-on-one situation against [Thibaut] Courtois.”

Some excellent footwork inside the penalty area from Branislav Ivanović set up Diego Costa to score on his home debut for the Blues. The Spanish international has scored in both games to start the Premier League season.

Mourinho had made another big selection call in leaving the striker Fernando Torres out of the match-day squad, which included Didier Drogba who received a warm welcome on his return to Stamford Bridge.

Former first-choice striker Fernando Torres did not even make the bench for today’s game with 36-year old Didier Drogba ahead of him in the pecking order. The Chelsea legend came on late in the second half.

Chelsea travel to Everton next Saturday in the evening game. The Toffees were pegged back late by Arsenal to draw 2-2 for the second consecutive week.