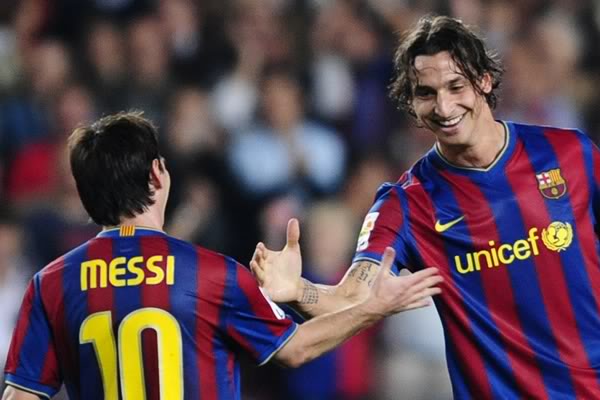 AC Milan coach Massimiliano Allegri has paid a glowing testament to his striker Zlatan Ibrahimovic who he believes is on a level par with Barcelona’s Lionel Messi.

The Swede has had a magnificent start to his Rossoneri career after joining from Catalonia on loan for the season with the inevitable transfer being made permanent at the end of the campaign. Zlatan has netted 17 times already in 26 appearances.

His coach Allegri is under no illusion that his striker is at the peak of his powers due to his current form and has played an integral role in the club’s rise to the summit of Serie A.

“There is no better player in the world than Zlatan Ibrahimovic.” the Milanese coach told SportItalia.

“Alongside Messi, he is the absolute strongest. He has character, determination and this year he has been decisive on many occasions.”

Ibrahimovic’s role at the San Siro has been compared to one of the great Marco van Basten. CEO Adriano Galliani made the comparison last November after the striker netted a spectacular winner against Fiorentina.

“Ibrahimovic is like Van Basten. His goal reminds me of the one Marco scored against Gothenburg in 1992 (European Championship Final).” he told Il Corriere dello Sport.

Zlatan’s all round game has benefitted the club immensely and his 10 assists give an indication to his unselfish like behaviour to work with his peers.

His brute strength and character have been key to Milan’s Scudetto charge. For the first time in seven years they hope to bag their first league title but are being heavily pressed by the Neapolitans in Napoli.

Having won eight league titles in his career, the 29-year old is certainly a winner and Jose Mourinho, who coached him for one solitary season during his time at Internazionale, believes that his former player is an incredible talent.

“I am only sorry that they didn’t get to know the real Ibra, the one at Barca wasn’t him and I don’t know why. But he is a phenomenon.”

Despite two league titles being stripped from his name due to Calciopoli with Juventus, the record speaks for itself. His presence within starting eleven’s plays a significant role in title challenges.

Many will speak negatively about his time in Barca but Zlatan may not have been right for the club, nor with Ibra being right for the Blaugrana. Matches aren’t always made in heaven but his presence within Serie A is certainly where he feels most at home. Nevertheless he bagged 21 goals in 41 appearances at the Camp Nou. Not bad for what has been described as a mediocre debut season in Spain.

All in all he is a spectacular footballer with attributes in abundance. Despite the thoughts of his coach, there is only one Lionel Messi whose talent is unparallel, he’s the phenomenon. As for Zlatan Ibrahimovic there is absolutely no doubt that he is one the world’s most prolific front men with a spectacular all round game.

Is a ninth league title on the cards? It certainly looks that way at present with Ibrahimovic leading the charge for his club.