According to reports from Italian Media Outlet Tuttosport, Liverpool midfielder Suso could well be on his way to Serie A giants AC Milan. The Spaniard who was tipped to have a great future for the Reds has just made one appearance this season after dazzling on his loan spell at Almeria last season. Despite Liverpool’s struggles this season and a lack of creativity, manager Brendan Rodgers too has been reluctant to give the youngster a chance. 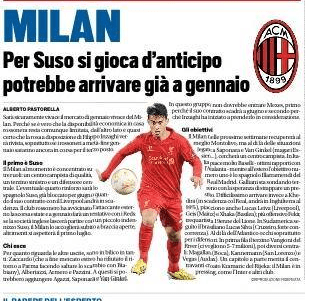 It now appears that a lack of game time might finally force the 20 year old to leave Anfield in the upcoming January transfer window. It is believed that the Rossoneri are in need of a quality midfielder who could be available for a low price and this is where Suso perfectly fits the bill. Suso’s contract is set to expire with Liverpool at the end of the season and Milan are willing to get the player on a loan deal till the season for a small fee before they can permanently sign him on a free in the summer.

Suso’s agent Jaume Serra has however played down the speculations and has also suggested that Liverpool might offer a contract extension. Serra said,”There is no agreement with Milan. It is certainly a possibility, but for now, there’s nothing more to say. Rather, Liverpool are pushing for his renewal, so we cannot rule even this hypothesis out. At the moment, it’s too early to discuss any possibilities.”