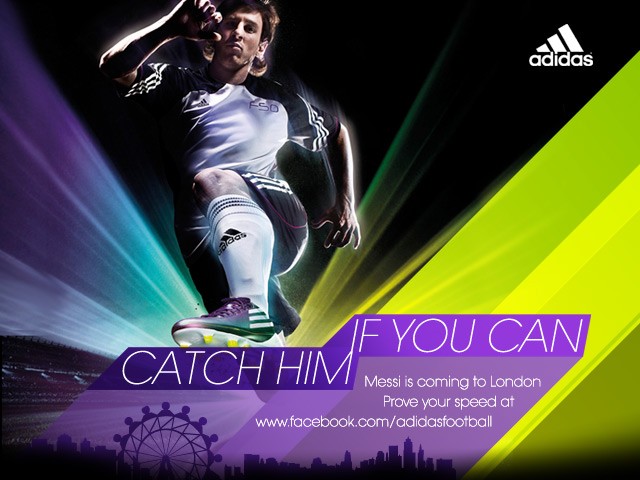 Once he’s there, he’ll be taking part in a massive city-wide game of ‘Catch Him if You can.’ Over the course of the day, Adidas will be sending him on a series of ‘challenges of speed’, set throughout the city, to see just how fast he really is.

Soccerlens will be bringing you exclusive updates to this event, before they are released to the public. This is your chance to see if you can catch Messi in London.

Will Messi Play For Your Team?

Here’s how the first part of the high-speed game of ‘Catch Him if You Can’ is going to kick off.

After touching down in London, Messi is going to be helicoptered to a football pitch somewhere in the city where there will be a game taking place. The kids don’t know it yet, but he’ll then be subbed into a live 11-a-side match as the ‘world’s best sub.’ Using his speed and skill, he’ll turn the game as fast as he can (I’m assuming that requires him to receive the ball, dribble through the opposition defence and smash in a goal, so roughly 5-10 seconds?), before disappearing to his next secret location.

We can’t tell you exactly where he’ll be or when (that’s for you to figure out), but stay tuned as we’ll be revealing more clues to Messi’s whereabouts in the next few days, exclusively here on Soccerlens.