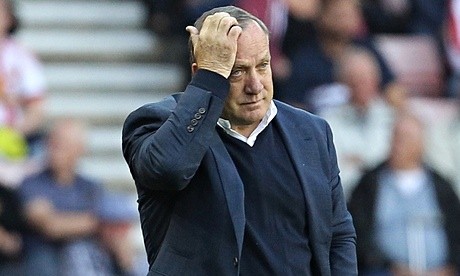 Sunderland fell to a second defeat in two games in an inauspicious start of their Premier League campaign on Saturday when they were outplayed and outscored by newly-promoted Norwich City.

They have now conceded seven goals in two matches, and are early favourites for a drop into the Championship at the end of the season. The Black Cats are firmly mired at the foot of the table, and there are more questions than answers for Dick Advocaat’s men.

If last weekend’s away defeat to Leicester City was acceptable to a certain extent given teams can be lacking in sharpness on an away trip for a season opener, there were no excuses for Saturday’s 3-1 home loss.

It was a disappointing afternoon for the Sunderland faithful; quite how they waited for three months for the first home game of the season only to find themselves booing their own players both at the half-time as well as the full-time whistle.

Why go for two forwards when you have have little to no creativity behind them? The half-time change of Seb Larsson for Danny Graham was even more baffling; Sunderland started the second half with three forwards and Lens, with Lee Catermole and Yann M’Vila behind them. Jermain Defoe often dropped deep to create, which isn’t a familiar sight in football.

As much as the Black Cats suffered from poor tactical choices by Advocaat, the Dutchman perhaps was rightly perplexed by the poor individual performances of his players. I can’t remember a Premier League player performing as poorly as left-back Patrick van Aanholt. Once on Chelsea’s books, his stock has clearly plummeted. Van Aanholt was at fault for two Norwich goals.

Norwich were always first to the loose balls, they had greater desire to force the issue which was lacking in Sunderland. The Black Cats were slow and ponderous in their build-up play, and hoofed the ball forward at the first sign of pressure. Sebastian Larsson’s set-pieces were either too short or too long, while Steven Fletcher’s touch deserted him.

As the Dutchman said after the game, “There’s something wrong. That’s quite simple,” things are hardly in place at the Stadium of Light. With five new signings over the summer, including players of the calibre of M’Vila and Lens, results this bad early doors in the season point to fundamental problems the club are facing at the moment.

Sunderland have now played two teams who were widely expected to be battling for safety before the season started, and defeats in two potential six pointer games have often induced kneejerk reactions from owners of Premier League clubs. Odd as it may seem, Advocaat is already on borrowed time in his job and the season hasn’t even ridden through August.

He had a chance to leave the club at the end of last season, but chose not to, after a dramatic turnaround in events to commit to a further year in Wearside. But whether his decision will be vindicated lies firmly on his as well as his players’ hands.

Sunderland were abject in their loss, managing to hit just six shots compared to their opponent’s 19. And as Advocaat said, “We have to find the reason [for the loss] otherwise we have no chance,” the Black Cats could be in for a long, hard season.

They next face high flying Swansea City in their relatively easy start to the campaign compared to their December schedule which reads Arsenal, Watford, Chelsea, Manchester City and Liverpool. Another loss at the hands of the Swans could spell the end for Advocaat’s reign, although these are early days to call.

For Advocaat to remain at the helm of Sunderland at the turn of the year, they must improve significantly, a massive understatement judging by their current predicaments.