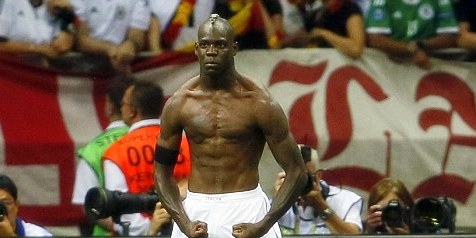 Mario Balotelli’s time in England was dotted with moments that generated a lot of hilarity among Premier League followers.

If the striker was not setting fire to his house or making a mess of undoing his training bib, he was found entertaining himself with an iPad while sitting in the reserve bench or throwing darts at a youth team footballer.

The enigmatic Italian has now done what no other footballer or sportsman has done in living memory – that of commissioning a life-size statue of himself!

According to reports from various sources in the press, the striker has contacted a local artist for the statue which is to adorn his home at Brescia.

The artist has revealed that ‘super’ Mario wants the statue with a pose of nonchalance and defiance, that which the striker generally does after scoring a goal.

In terms of the details of texture and material, the sculptor Livio Scarpella told Il Giornale di Brescia as quoted in The Guardian:

“I have imagined him as an athlete from ancient times and the statue will be a mix of classical and pop style in platinum and coloured bronze with the eyes made of stones.”

The choice would surely be befitting of Balotelli’s real-life persona, the striker amazed everyone by revealing the words “Why always me?” after scoring a goal against Manchester United in the wake of the incident when he had set fire to his house!

On pitch, it has been a mixed spell so far for Balotelli in AC Milan colors. While the striker is in fine scoring touch with four goals in four games in the Serie A, his angry gesture at Inter Milan fans in the weekend derby fixture will make him just €10,000 poorer.

That’s small change for a player who, when asked by the police in England, why he had £5,000 in his back pocket answered “because I’m rich!” Milan fans will hope that the striker keeps his off-field antics a bit low-key and perform to his potential for the club.