Chelsea were comfortable winners at Stamford Bridge a fortnight ago when these two met for the first time in this season’s competition. The Blues are in fine form and it would a shock if they record anything but a win on Wednesday.

Maribor were out of their depth in the first game which came as no surprise to anyone. The Slovenian outfit are quite literally making up the numbers in this season’s competition but making a nice profit in the process.

José Mourinho’s side return to England to face Liverpool at Anfield on Saturday so we can expect the manager to rotate a few players for this game.

Diego Costa returned to action on Saturday and had a generally quiet game. It would be a surprise to see the striker risked with a big game at the weekend. Loïc Rémy is injured so maybe Didier Drogba will get another start. If not, André Schürrle is an option.

José Mourinho has otherwise got a full squad to choose from. 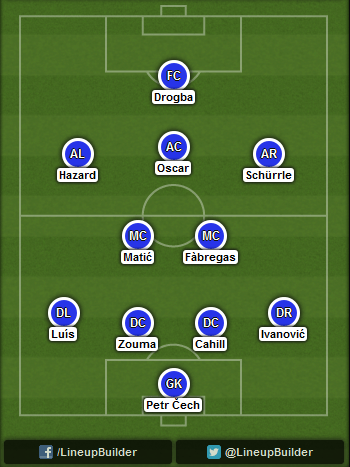 We’re giving rests to Thibaut Courtois, John Terry, Willian and Diego Costa. Wouldn’t be surprised if José Mourinho rested a few more – however Eden Hazard, Oscar and Cesc Fàbregas have the energy to play game after game. Mourinho does like to keep his defence together as often as possible though. Liverpool have to be in mind three days later and Chelsea know they can rest a few players and still beat Maribor comfortably based on the first meeting.

Eden Hazard vs Petar Stojanović
Eden Hazard tore the Maribor right-back to pieces in a man of the match performance during Chelsea’s 6-0 win a fortnight ago. The Belgian is in great form and loves playing every game. If Mourinho starts him you expect Hazard to be a contender for man of the match again.

Cesc Fàbregas vs Željko Filipović
Cesc Fàbregas didn’t have a massive influence in the first game, mainly as the rest of his attacking teammates took control. If the ex-Barcelona player starts but a few teammates are rested you can certainly expect Fàbregas to step up to the plate.

André Schürrle vs Mitja Viler
Willian had a good game versus the Maribor left-back who really struggled in the home match between these two which included scoring an own goal. Should the Brazilian winger be saved for Saturday, look out for André Schürrle to start the game and be a real threat down that flank. The German has pace and is a goalscorer.

Prediction: Maribor 0-3 Chelsea
Chelsea are capable of thrashing Maribor away from home but we think José Mourinho will rest a number of key players and those that do start will be rested in the second half when they have a comfortable lead. A trip to Liverpool on Saturday is an important game for the Portuguese manager who has had his battles with the club in the past and will also want to maintain his sides nice lead at the top of the Premier League.