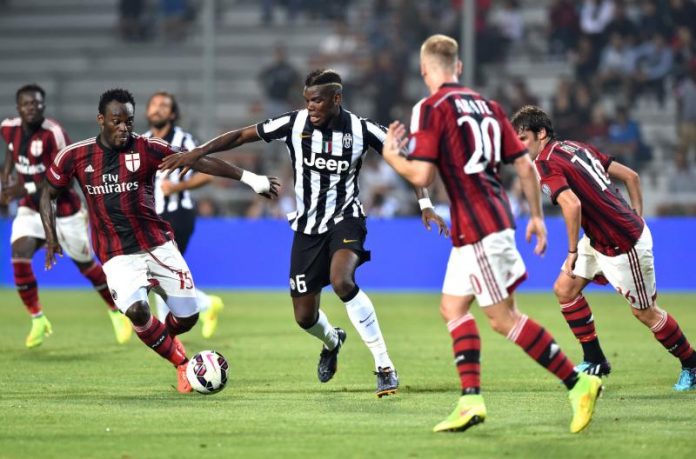 Paul Pogba squared up to Sulley Muntari as the Ghanaian attempted to get an incoming pass under control. Muntari would never get the chance to settle the ball. Pogba swiftly pickpocketed the Milan man and left him on his backside, turning towards goal to claim his next victim. The Frenchman effortlessly nutmegged Michael Essien in one fell swoop, racing away to set up Juventus’ third goal of the night. The dagger had been plunged into Rossoneri hearts – and in symbolic style.

A once grand institution, Milan only continue to plunge further into ignominy with each passing week. Watching the Diavolo flounder against a dominant Juventus side only underlines the gap between a club that has let time pass it by, and one that has revived itself. It starts with what has happened off the field, Milan’s failings outside the lines wreaking havoc on what transpires on the pitch.

November of 2012 was the last time Milan beat Juventus in a competitive fixture. In a controversial encounter, a hotly debated Robinho penalty settled the Serie A tie 1-0 in favour of the Rossoneri at San Siro. The victory would ultimately prove a vapid one. Six months prior, Milan had missed out on the Scudetto by four points to Antonio Conte’s Old Lady side. Since, the San Siro outfit have hardly competed for an honour of any sort, the side gutted of most of the remaining quality while imprudent decisions reigned supreme.

Juventus went on to win their second title in a row that term, a certain Pogba flourishing in his first campaign in Italy. The boy who had slipped the net at Manchester United and arrived in Turin for nothing more than a measly compensation fee was destined for the limelight. The brighter his star became, the more Milan’s faded – and much of the latter is the fault of the management at Casa Milan, formerly residing at Via Turati.

As Milan fell 3-1 to the league leaders on Saturday, their line-up looked a relic. Cristian Zaccardo and Alex made up half of the back line. Worst looking was the midfield, where Muntari and Michael Essien each took up their mantle. Both played 90 minutes on the day. And both were dreadful. The pair were constantly caught in possession, letting off inaccurate passes when given the chance. Muntari was hugely at fault for Juventus’ second and third goals of the evening. Two static presences stood at the heart of Milan’s once proud midfield, providing little energy and dynamism to help control the game, if at all.

That it was Pogba running rings around the two said everything. Essien was once a brilliant player for Chelsea, but one the Blues were happy to offload when his decline was evident. Milan snapped him up, if anything, for his marketability. Muntari, meanwhile, has long been regarded as an erratic player, one who has been increasingly ineffective over the last 18 months. When the current season began, Pogba was earning a reported €29,000-per-week at Juventus. Milan were said to be paying Muntari and Essien each €48,000-per-week, the former fresh off signing a contract extension at San Siro in June. Do the math.

In October, Pogba was at last handed a long-awaited pay rise, increasing his wages to a salary in the region of €77,000-per-week. It was progress. Juventus were rewarding their young star for his exploits, all while safeguarding an asset that someday soon they’ll likely be forced to sell. In the background, Milan continue to sign considerable cheques for the likes of Muntari and Essien, arguably their two most shocking performers in their latest defeat to the Bianconeri. One side makes progress as the other continues to be mired in a retrograde cycle.

Before the transfer window slammed shut last Monday, Adriano Galliani brought in six new players. Three were attackers – Alessio Cerci, Suso and Mattia Destro – while the other three were defenders – Gabriel Paletta, Luca Antonelli and Salvatore Bochetti. Not a single midfielder arrived to shore up the weakest part of the squad, Milan’s poverty in the centre of the park rendering the attack and defence ineffective time and time again. 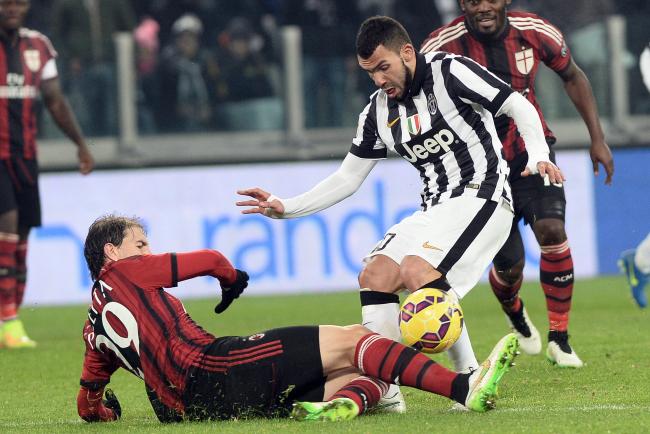 Against Juventus, it was the same story. Paletta slotted in alongside Alex in central defence, thrown in at the deep end in a trial by fire situation. A suicidal high line saw both torched by Carlos Tevez for the opener, the midfield failing to provide any relief. Cerci was able to assist Antonelli from a corner kick, but was otherwise isolated and harried off the ball. Antonelli was certainly Milan’s best player on the day, yet it’s clear that any success he’ll have at San Siro will be due in large part to his own individual qualities – having the stamina to track back and cover his own runs from left-back, for instance.

It’s baffling as to why Milan didn’t elect to bring in another midfielder, especially at a time in which Nigel de Jong is injured and is nearing a summer exit with his contract running down. The lack of planning by Galliani and company is there for all to see. Instead of a cohesive policy, there is a scattershot approach in place that isn’t solving key problems.

Papering over the cracks isn’t really an option, either. Milan were woefully exposed by Juventus, with Inzaghi’s deficiencies as a head coach laid bare. Players don’t fit in the roles they’re meant to occupy, and those roles look ill-defined to begin with. By no real fault of his own, Inzaghi is a novice coach who has been tasked with a massive job that is beyond his capacities at this point in his coaching career. Silvio Berlusconi wants Milan to play expansive football, something he’s undoubtedly pressed into Inzaghi, but that’s an unattainable product. The players can’t provide it an inexperienced Inzaghi can’t teach it, resulting in a disjointed brand of football that lacks organisation and pragmatism.

The Italian’s opposite number at Juventus, Massimiliano Allegri, has during his time as Conte’s successor done the seemingly impossible task of altering the club’s tactical set-up. Allegri initially carried on with Conte’s favoured 3-5-2, but has since successfully transitioned to a 4-3-1-2. Juventus remain as strong as ever from an organisational standpoint,  and players don’t seem in any doubt about what they’re meant to do. Against Milan, they were methodical. Tevez and Alvaro Morata were exceptional going forward. The defence gave the Rossoneri little time to make decisions. And in midfield, Pogba led the charge as the youngest of an accomplished bunch.

While Pogba’s contrasting fortunes with Essien and Muntari illustrate the divergent paths of Juventus and Milan, Allegri too stands as a marker. The Italian was of course cast aside by the Rossoneri last term with the club in dire straits, made a scapegoat of sorts for failures. Clarence Seedorf took over for him, quickly made into the fall guy himself at the end of the season. Now it’s Inzaghi’s turn to take the blows. One can only wonder how long the former Juventus and Milan striker will be kept around in an unforgiving environment that nobody could have reasonably expected him to be prepared for.

And as he understandably struggles to get his bearings, Allegri leads Juventus towards yet another Serie A title, now holding a significant lead over second place Roma. Milan and Juventus once stood on the same pitch as equals, titans clashing in a classic fixture that was a privilege to enjoy. On Tuesday, it was men against boys, and one needed look no further than to the midfield and men on the touchline to see the difference. Onwards and upwards it is for Juventus with an engine named Pogba and a suit-donning boss once painted as the main problem at Milanello. For Milan, things will stay much the same until the past can be overcome. Essien and Inzaghi once covered themselves in glory on the pitch, but don’t have what it takes to lift Milan to the levels the club formerly knew. One would be hard pressed to say it’s any fault of their own – the men at the top put them there, the orchestra on a sinking ship as those responsible float about in a lifeboat down below.