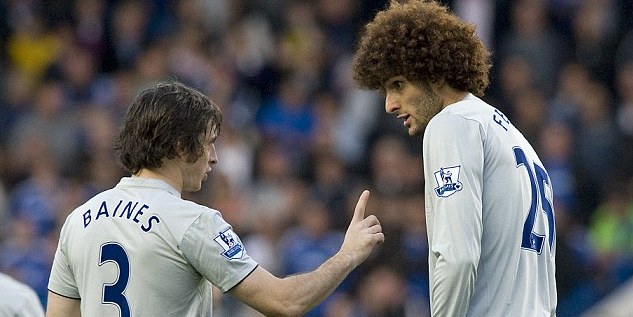 Manchester United strolled past Swansea City 4-1 on Saturday, but new manager David Moyes must know that few surgeries are still required before the transfer window closes. The club has yet to sign any major names, while Moyes has been unsuccessful in landing his prime target Cesc Fabregas from Barcelona.

The Red Devils were linked with Everton duo Leighton Baines and Marouane Fellaini in the summer earlier and Moyes has returned again to his former club, with a joint £28 million offer, only to be let known that neither of the two players are for sale.

United values Fellaini at £16 million while the left-back Baines for £12 million, but Everton insist neither of the two would be sold in this transfer window.

It is understood that the Goodison Park officials have been left outraged at such an offer for Fellaini, whose £23.5 million buy-out clause on his contract has expired recently, and consider the offer as derisory. They were furthered incensed when the Old Trafford club included Baines as part of the deal for a further £12 million. Needless to say, such offer was rejected outright.

A statement from Alan Myers, Everton’s new director of communications, on the club’s website said:

“Everton can confirm that it has received bids from Manchester United for two players. Those bids were immediately rejected out of hand as derisory and insulting.

“The Club did not make public these details as it was vital Roberto Martínez’s preparations for the opening game of the Premier League season were not disrupted in any way.”

The 25-year-old was signed by Moyes, during his time at Everton, from Standard Liege, for a reported fee of an initial £15 million that rose to £17.5 million. Everton believes that true market valuation of the Belgian is in excess of £23.5 million.

However, United officials feel just the opposite, which in itself is flummoxing, as Fellaini is not only an established member of the Belgian side but has made over 174 appearances for the Toffees in five years, with last season being one of his best, where he bagged 11 league goals.