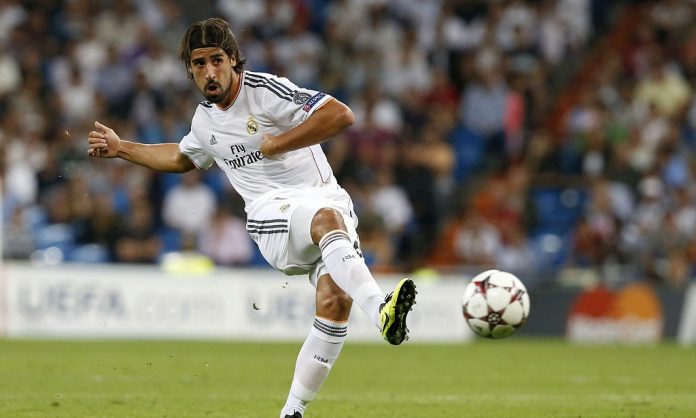 Manchester United’s search for a new midfielder looks likely to continue in the January transfer window, with an ideal transfer target potentially unsettled in Spain.

Sami Khedira, who the Premier League champions are thought to have made a late bid for before the summer transfer window closed, has voiced his discontent at Real Madrid, stating that he is being treated as a scapegoat.

The Germany international says he believes that he is unfairly victimised in the Spanish capital, which will come as real interest to David Moyes.

“I’m not a Spanish player, I did not cost a lot of money and I am one of Mourinho’s disciples,” Khedira stated.

“I started the season on the bench or in the stands. Even if I play well, I am the scapegoat and so will not be properly valued.”

Khedira was vocal earlier in the season about his frustration at the Santiago Bernabeu club selling compatriot Mesut Ozil to Arsenal, and the Old Trafford faithful will hope that the 26-year-old will follow suit and move to the Premier League.

United are currently lacking a player to grab a game by the scruff of the neck; someone who has the physical abilities and presence to inspire others. Mr Moyes may well hope that Marouane Fellaini can be this player, but after a slow start to life in Manchester, the club’s fans are yet to be convinced.

Khedira is a player who has become a lynchpin for a Germany side that will take some stopping at next year’s World Cup, and was a favourite of Jose Mourinho last term. The former Stuttgart man has mastered the box-to-box element of his game over the last 12 months after initially being pigeon-holed as a holding midfielder, and looks as accomplished a player as anyone in his position in Europe currently.

Granted, Khedira does not have the creativity or tact of someone like Cesc Fabregas, but he would more than make up for this by his energy and enterprise going forward. His range of passing is accomplished, while his ability to break down opposition attacks and go toe-to-toe with opponents is prominent in every game he plays.

Alongside steady pass-master Michael Carrick, Khedira could be given a licence to be Moyes’ wrecking ball and would certainly lift the standard of United’s midfield options. Arsenal have been rejuvenated by the signing of one Germany international from Real Madrid; who is to say that United would not be with the addition of Khedira?

Whether Madrid would be willing to sell remains to be seen, but there certainly does appear to be trouble in paradise. With Luka Modric, Xabi Alonso and Asier Illarramendi vying with Khedira for two central midfield berths, a significant United bid in January could well be interesting viewing.