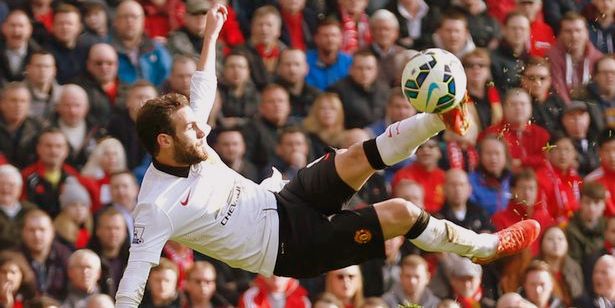 With only eight games remaining in the Premier League, we’re slowly approaching the business end. Voting has opened for the PFA awards – and at Soccerlens, we are running the best XI series – starting with the herculean task of predicting the Manchester United’s best starting XI of the season.

Having spent over £100m on new players last summer, the task wasn’t always easy for the United manager Louis van Gaal to pick his best eleven, with luck on injuries hasn’t been kind to him at all.

In the traditional 4-4-2 system, I have tried to pick the best starting XI for Manchester United, taking both objective and subjective parameters into consideration.

The Spaniard is not only United’s best player for the 2014/15 season, but he is a strong contender for the Premier League goal keeper of the season as well.

Frankly, where would United be without his saves? United have largely struggled to replicate their trademark free-flowing football under van Gaal as the squad relied mostly on grinding out results. And in most cases, De Gea’s jaw-dropping heroics proved to be the difference between victory and defeat for his team.

After a shaky start to the season, Smalling has silenced his critics with some strong performances that earned him a national team call-up recently.

Earlier in the season, van Gaal branded Smalling ‘stupid’ for his silly sending off against derby rivals Manchester City, while the defender also grabbed headlines on the front page for going to a fancy dress party as a suicide bomber.

Having learnt from past mistakes, Smalling has let the football do the talking for him. His recent performances against Tottenham and Liverpool prove that he is indeed playing with a tremendous confidence at the moment and the responsibility bestowed on his shoulders is not misplaced.

In a 3-man defence, both Rojo and Jones should have booked their places. But, where there is a choice to make between the two, the England international deserves the nod.

Both Rojo and Jones have a strikingly similar stats – both have a passing accuracy of 86%, and both have more-or-less equally contributed in terms of average defensive actions (clearances, blocks and interceptions).

Rojo being more adventurous has created eight chances (assists & key passes) going forward, but where Jones has made a strong impression is with his discipline at the back. The 23-year-old has yet to make any defensive error that leads to a goal, compared to four committed by the Argentine.

Blind has been mainly used in the central midfield, but has looked equally competent while playing at left back.

Injury crisis has forced the 29-year-old to be consistently deployed at right-back this season, and he has come out on top among the other possible options.

Carrick has been injured for periods, but whenever he’s played he’s been a class apart. He brings the much needed balance to the side and builds up the attack from the back. He is possibly the best ‘regista’ England have had in a decade, yet he still remains one of the most under-rated players in the league.

The former Athletic Bilbao midfielder with a keen eye for goal and pass has created 16 chances (key pass & assist) for his side.

First the obvious question, why not Angel di Maria? The Argentine has registered nine assists this season (second highest assists in the Premier League) but Young on the other hand has looked better on the pitch.

While Di Maria’s form has dipped alarmingly, Young has been a player reformed. He has done enough (both attacking and defensive wise) to justify a claim on the left hand side in United’s best XI this season.

Mata is a lovely player to watch when he is on song. It’s a pity that a class player like him has been so severely under-used by his manager.

He has always delivered whenever he’s been asked to put on the shirt. With seven goals and three assists (28 key passes) to his name, it’s hard to leave him out.

What a terrific comeback by the Belgian midfielder! Just when we all thought his United career is going from bad to worse, he not only proved a point to his manager and silenced his critics but has regained the trust of the fans as well.

With a strong physical presence, but technically smart, Fellaini has proved why he is so effective playing the supporting striker role.

The United skipper has been an epitome of consistency this season (11 goals in 26 appearances), despite him being shifted from one position to another by his manager. 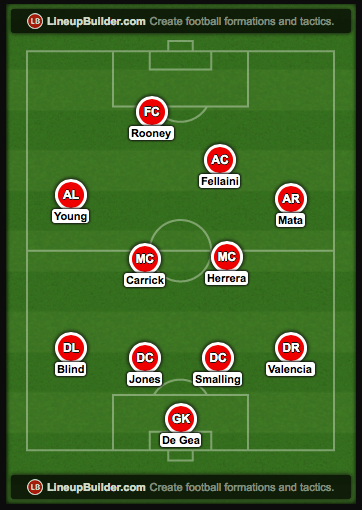 Let us know your thoughts about the team selection and your favourite Manchester United XI for the season. Follow us on Twitter.