The Gabriel Jesus transfer saga takes a new twist with Manchester United registering a late interest in the Brazilian forward and Spanish newspaper AS has rightly described it as a ‘soap opera’.

Manchester City appeared to have won the race for the young Brazilian striker after the Premier League giants had submitted a €32m bid for the player, which is €8m more than what Manchester United, Real Madrid, Barcelona, Bayern and PSG are supposed to pay as per his contract.

According to the latest report from AS, Jose Mourinho, the new Manchester United manager, has registered an interest in the player and Manchester United are firmly back in the race for Gabriel after the Red Devils had made contact with Palmeiras to inform them they are willing to pay €35m for the exciting young striker. 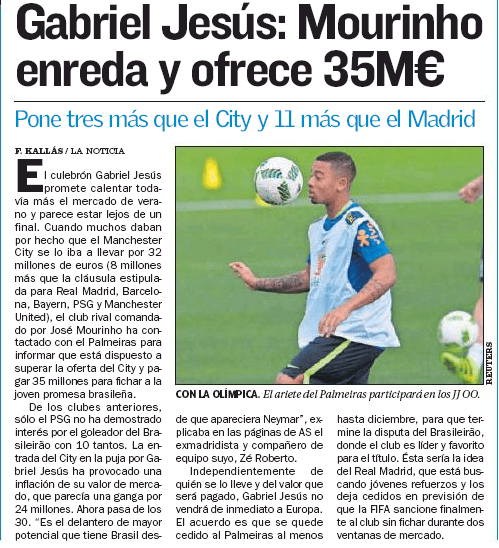 The unexpected move from City has changed the scenario completely: where €24m looked an absolute bargain a few days back, the market has become inflated with transfer price exceeding €30m now.

Regardless of who wins the bidding war, Gabriel Jesus will not move to Europe this summer. He will likely to be sent on loan to Palmeiras until December or at least to the end of the Brasileirão, where the club is favourite to win the title. Real Madrid are also interested in signing the player and have had held discussions with Palmeiras president but Los Blancos have yet to lodge a formal bid for Gabriel.

The report doesn’t make enough sense to me. Why would Manchester United want to pay more than €32m when all they need to do is agree to a deal with the Brazilian club for just €24m?