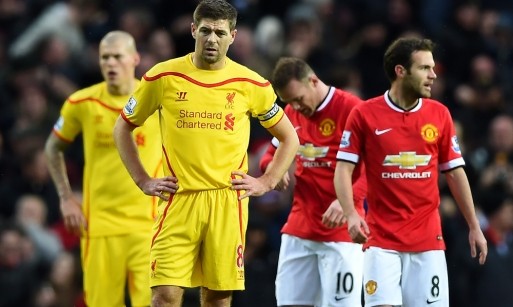 Louis Van Gaal’s men made it to six wins in a row, as Manchester United swept aside a hapless Liverpool side at Old Trafford this afternoon.

Brendan Rodgers’ side started the game impressively as the visitors pressed relentlessly and forced the home side into mistakes, while in possession. Liverpool’s impressive display at the start came close to being rewarded with a goal when Sterling was sent through one on one with the keeper. Adam Lallana’s superb pass found the young England international inside the Manchester United box; however, Sterling’s attempt was saved by a strong right hand from David De Gea.

Having saved the attempt from Sterling, United took the lead when Valencia found Wayne Rooney at the edge of the box after a superb break away. United doubled their advantage after a refereeing indecision as Juan Mata headed in from a clear offside position. The victory was complete after a poor clearance from Lovren led up to Robin Van Persie’s goal in the second half.

The win takes Manchester United up to third in the table, ten points ahead of tenth placed Liverpool. Having crashed out of the Champions League earlier this week, Liverpool disappointed with their performance yet again, as their top four hopes continue to fade.

Whether Brendan Rodgers can turn it around at Anfield remains to be seen, meanwhile, here are a few important talking points from the Northwest derby today.

Brendan Rodgers’ team selections have been questionable this season and his decision to not start with the likes of Markovic and Emre Can today was surprising.

Liverpool struggled to dominate the midfield physically against the likes of Fellaini and their central midfielders had little to offer, going forward. Emre Can’s powerful presence and versatility would not only add much needed robustness and tenacity to Rodgers’ midfield, but offer something extra going forward as well.

The same could be said about Lazar Markovic, who could have benefited against United’s makeshift full backs.

While there are question marks over the decision to pick Lovren and Skrtel ahead of Sakho and Toure, it could be that the manager was reluctant to rush the duo back, after having just recovered from an injury.

United extended their winning run to six games in a row as Louis Van Gaal looks to take his side back to the Champions League next season. The Old Trafford outfit have been on an impressive winning run, despite not being at their best for a while now.

Today was no different. Despite an average display in the midfield and defence, United managed to clinch the three points comfortably, thanks to their sharpness in front of goal and some David De Gea heroics.

Brendan Rodgers will have to make the necessary changes, starting with his back four, if he wants to have a slim chance of finishing in top four this season. 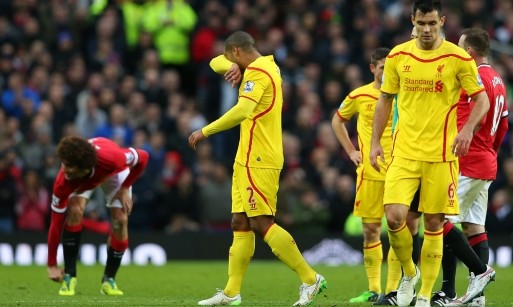 The likes of Johnson, Skrtel and Lovren have been massive disappointments throughout the season and it is high time for a change. The likes of Toure, Manquillo and Sakho, although nothing extraordinary, have been much more consistent and reliable when played.

Although it is normal to stick to a consistent back four and allow them to gel over a period of time, Brendan’s preferred CBs and Johnson have shown no signs of improvement and continue to cost the side crucial points, week in week out.

The young Spaniard continued his heroics in between the sticks as the former Atletico Madrid goalkeeper put in yet another masterful display in front of the Old Trafford faithful. 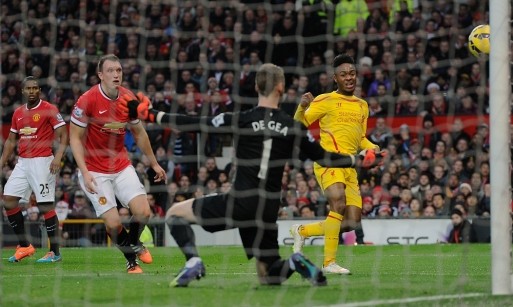 De Gea, who has arguably been the best keeper in the league and United’s best player this season, managed to keep a clean sheet despite countless chances falling to the visitors, who had 9 attempts on target this afternoon.

The young keeper made some fantastic saves off Balotelli and Sterling as he continues to mature with every game.