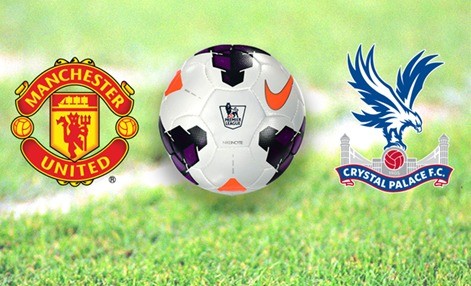 Manchester United are looking to bounce back strongly in the Premier League after their defeat at the hands of arch rivals Liverpool at Anfield before the International break. The Premier League Champions entertain the newly promoted side Crystal Palace at Old Trafford on Saturday.

Crystal Palace on the other hand are heading to Old Trafford with bags of confidence after Ian Holloways’ men earned a 3-1 victory over Sunderland in their last match.

The Red Devils had a relatively quiet transfer window but on the transfer deadline day, Moyes managed to land Belgium international Marouane Fellaini from his former club Everton and the towering midfielder is expected to make his debut against Palace.

England ace Wayne Rooney is still out injured with a head injury, so Danny Welbeck will lead the attack alongside the mercurial Robin van Persie. Likewise, defender Phil Jones is out for this tie with an ankle injury while Shinji Kagawa, who was clearly unhappy with his manager for handing him a bit-part role so far, is doubtful for this tie too, as the diminutive Japanese is struggling with Flu.

The Eagles remained busy in the transfer market as Holloway added 16 new faces to his squad in the summer. Late signings Adrian Mariappa, Barry Bannan, Cameron Jerome, Jimmy Kébé and Adlene Guedioura, all will be hoping to make their first appearances on Saturday. Jonny Williams and Jack Hunt are out of the trip to United and face months on the sidelines.