It is difficult to work with Van Gaal, says Real Madrid forward

Manchester United loanee, Javier Hernandez has been enjoying life at Real Madrid. Having scored a later winner in the Derbi Madrileno a week ago, Chicharito has done well the fill the void left by the injured Karim Benzema.

The Mexican international has had a mixed spell at the Santiago Bernabeu. Despite scoring goals when presented with an opportunity, Chicharito has often been starved of game time this season.

Furthermore, with the Spanish season close to a conclusion, the Mexican striker looks set to return to his parent club, Manchester United. However, according to reports Louis Van Gaal is not keen to welcome him back and would consider a sale. 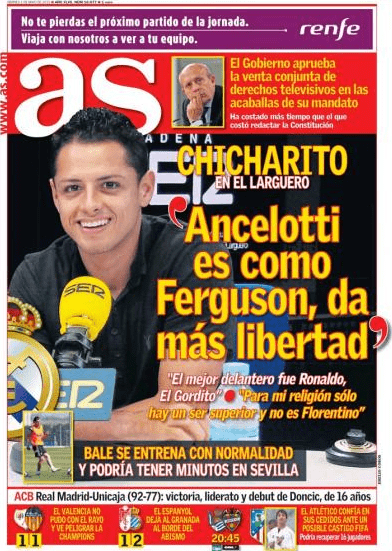 Speaking to AS, Hernandez implied that he did not enjoy the short spell he had under the Dutchman.

“Ancelotti has a bit more contact with us and he is more relaxed. Van Gaal likes routines, timetables are always very rigid. He’s very strict on discipline. Ancelotti is more like Ferguson, he’s more liberal”, he said.

Van Gaal hinted last week that Hernandez could be sold despite his goal scoring form in Spain. However Hernandez was quick to dismiss the reports claiming he was misquoted before the derby too.

“I don’t know if he said that or not. An English newspaper’s printed some comments once, just before a derby, they printed things which I didn’t say.

“If he did say that, then that is his opinion and you have to respect that”.

Regardless of his form, it is unlikely that Hernandez will have a future at Manchester United.

And as far as Van Gaal is considered, Chicharito is not the only player who found working with the Dutchman ‘tough’. The Bayern Munich dressing room will agree.